A Grade I Listed Building in Coedkernew, Newport 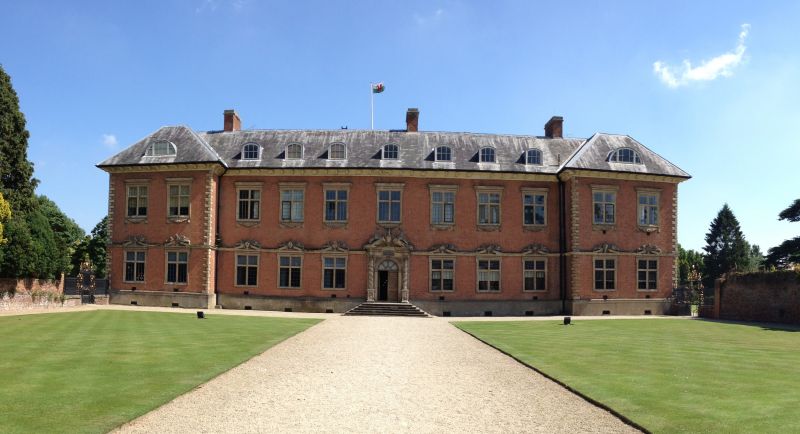 Location: Country House set in a landscaped parkland setting on the South side of the M4 at Tredegar.

The seat of the Morgan family from the early C15 through to the mid C20. The late medieval house was arranged around three courtyards with halls in the SW and NE wings. The surviving medieval house was incorporated into the SW wing of the much grander, classical house that was built between 1664 and 1672 by Sir William Morgan (d.1680). The SW hall survives in a modified form as the servants hall. In the C19 alterations were carried out to the roof and the SE wing was substantially rebuilt. Architect is unknown, however, Roger and William Hurlbutt, master carpenters of Warwick, may be responsible, having worked at Ragley Hall, Warwickshire and Maiden Bradley, Wiltshire. After the Morgan family died out in 1951 the house was used as a boarding school. Owned by Newport Borough Council (now County Borough) since 1974 when it became open to the public along with its grounds.

Predominantly post-Restoration house in Carolean style exhibiting French and Dutch influence. Built around four sides of a quadrangle incorporating the earlier medieval hall in the SW wing. Two storey, red brick house of English bond, slated roof with attics, cellars beneath. The roof was remodelled in the late C18/earlyC19 when the shallower pitched and hipped roof replaced the steeply pitched roof with cupola and balustrade, and the semi-circular, sash-glazed, dormers were added to all elevations. Ornate, heavy carved wooden modillion cornice with scrolled acanthus detail. All of the windows of the Restoration house are of cross-frame mullion and transom form with square leaded lights. The first floor windows to NW and NE have festooned aprons while the ground floor windows all have armorial broken pediments supporting the lion and the griffin of the Morgans and form a continuous band with a moulded limestone stringcourse. The NE elevation is symmetrical, of nine bays, C19 ornate central door surround, modelled on front (NW) entrance, in the form of a baldachino with stepped, paired Salomonic columns supporting heavy entablature with armorial broken pediment over, flanked by hour glass balustrading. Door surround within porch has semi-circular stone pediment. Projecting, hipped pavilions with central thermal dormer to either end. The NW elevation matches the NE elevation, but is eleven bays. The C17, central doorway is similar to that of the NE elevation; with broken armorial pediment overset with the arms of the Morgan family with the Morgan beasts to either side. Slate tablet set within entablature, carved acanthus cornice.
Round-headed doorway with scrolled acanthus, keystone and foliate spandrels. Mannerist Salomonic columns to either side, each with entwined foliage and fruits. Composite capitals. Plinth set with bunches of fruits to front face. The SE elevation is C19 except for the two windowed pavilion (repeating NE elevation) to right hand side. Central three storey, four bay range with low hipped slated roof, rebuilt in C19 with rendered blind arcading to ground floor with two-light bathstone mullion windows set with small-paned sashes. Similar shallower windows above and stone mullion and transom windows to top storey, copying C17 windows but omitting aprons, the bottom lights set with small-paned hornless sashes. Cellar doorway to left hand end. The SW wing incorporates the earlier medieval range constructed of limestone rubble elevation with small mullioned windows. Rendered gable of late C15 hall range projects forward at extreme left hand side. C19 fenestration with two-light mullion window set within gable with two long mullion and transom windows. SW elevation has three windowed Restoration pavilion to left hand side, repeating details of NE/NW elevations. Extreme left ground floor window has flight of steps providing direct access to the garden from the Gilt room. To the right is a single bay with rendered gable on N side of the C17 house which merges with the remains of the late C15 house at this point. To left is a gabled outshut of coursed rubble with dressed quoins and to the right is the long lower hall range with elevation of local coursed rubble. Two massive projecting lateral stacks (now capped); modern lean-to at right hand end of outshut and C19 timber casements with square leaded lights. Central flagged courtyard with mostly rendered elevations has a single storey, slated, lean-to canopy, supported on cast-iron stanchions running around the perimeter, with a series of C19 mullioned windows with square hoodmoulds over and early C19 sashes.

Listed grade I as one of the finest Restoration houses in Britain.