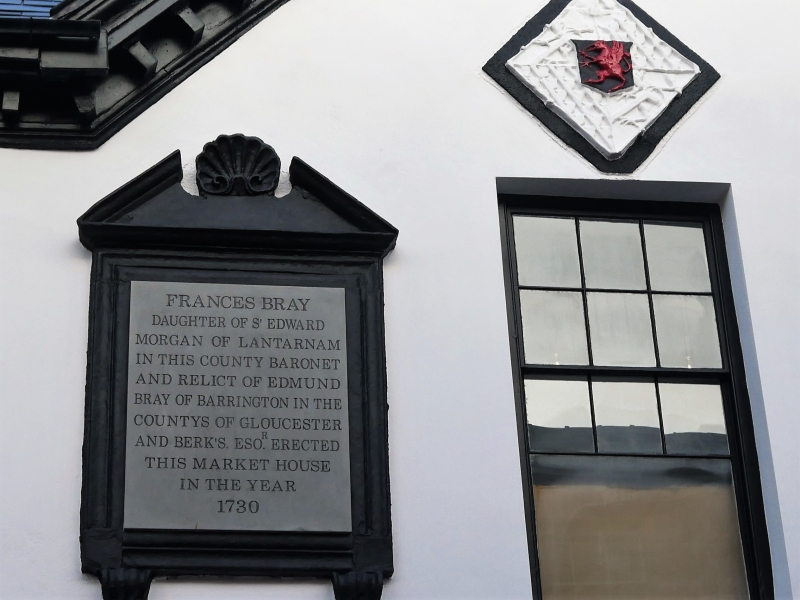 Location: In Pontypool town centre in Commercial Street near the junction with Crane Street.

The building is dated 1730 and the inscription reads 'FRANCES BURNEY, DAUGHTER OF SIR EDWARD MORGAN OF LLANTARNUM AND RELICT OF EDWARD BRAY OF BARRINGTON IN THE COUNTY OF GLOUCESTER AND BERKS ESQ ERECTED THIS MARKET HOUSE IN THE YEAR 1730'. The inscription is repeated in Welsh. This building remained Pontypool Market until the erection of the Vegetable Market in Market Street in 1875 (now demolished). A possible attribution for architect would be the Fisher of Bristol who is recorded as having designed Monmouth Shire Hall in 1724. There is a small projecting block at the back which may be a later addition.

An early C18 market house of two storeys. The ground floor, presumably once open, is entirely modern with a glass and aluminium shopfront, above is rendered and painted, with a Welsh slate roof. The first floor has a pediment/gable with a central window on the left, and an additional window to the right. Both windows are plain six over nine early C19 sashes, except the bottom six panes of the lower sash are now one pane. The tall narrow proportions of the openings suggest that these are unchanged and that they originally had cross-framed casements. The left hand window is flanked by inscription panels on brackets and with pedimented heads. These carry inscriptions in English on the left and Welsh on the right. Above this window is a moulded plaster diamond. Timber modillion cornice, plain roof.
Rear elevation has a projecting two storey hipped roof block at lower level. This could be a later addition. Two blind windows on the upper floor, door and plain window on side elevation.

Interior not seen at time of resurvey (October 1996) except for the ground floor which is very altered.

The building, which survives in part from 1730, is of historical interest as the first Market House in Pontypool. It also has group value with other commercial buildings nearby.