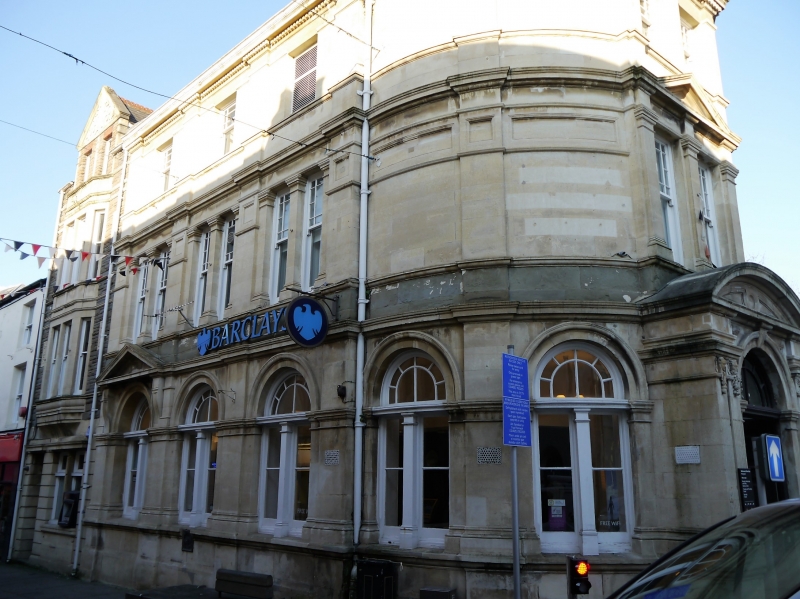 Location: In Pontypool town centre at the north end of Commercial Street at the junction with Park Road.

A purpose built bank in the French Chateau style dating probably from the 1880's.

An importantly sited building in French Chateau style standing on the narrow site at the junction between Commercial Street and Park Road and forming a visual stop. The narrow end elevation is the most significant one. Built of yellow ashlar limestone of the Bath type it forms a three storey and attic tower with the top floor in a conical Welsh slate roof capped by a small lead cupola. The ground floor has arched windows on either side of a panelled door with small pediment and fanlight over. The ground floor windows appear to have iron frames and central mullions. Cornice forming a cill band to the first floor. This has a central paired sash window in pilastered, consoled and pedimented surround. The pilasters rise into the second floor which has a paired window and again into the attic where the window is topped by a shaped gable with a ball finial. All the windows are two pane sashes, but most have fancy glazing in the upper sash and plain glass in the lower sash. Strip pilasters rise on either side through both floors supporting bands, cornice and parapet.
The Commercial Street elevation has a further three bays with paired windows between pilasters rising to a cornice and parapet as above, then an additional bay of different design but the same date which has now been taken into the bank premises. This is ashlar on the ground floor but thin coursed rubble above with ashlar and red brick dressings. This has a paired window on the ground floor with a doorway with rusticated surround to the left. The first floor has a two light oriel, the second floor a paired window, the attic has a double window with a decoratively carved pediment over.
Park Road elevation is of yellow Blaendare bricks with freestone dressings. The details of the windows are as the Commercial Street elevation.

The interior of the ground floor has been entirely refitted, but the basic room, which can only partly be seen may well be largely unchanged.