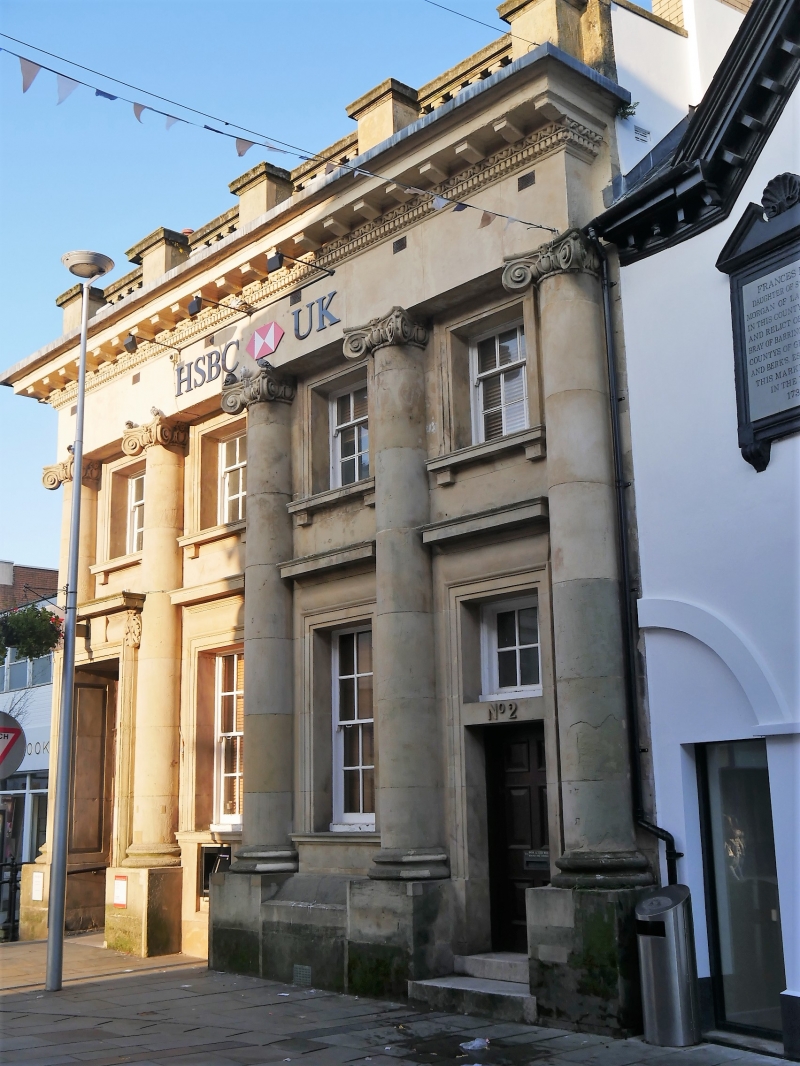 Location: In the Pontypool town centre at the junction of Commercial Street and Crane Street.

A purpose built Midland Bank in the Classical style; a late example of Edwardian Baroque, dating probably from just before WWI. The main elevation is built of yellow limestone ashlar probably Bath stone, the other elevations are yellow brick, perhaps from Ebbw Vale or Blaendare brickworks. The roofs are not visible from the street. Two storeys with a four bay frontage articulated by a giant order of Ionic half columns which support a plain frieze with attached plastic lettering MIDLAND and a deep modillion cornice. The ground floor has low six over six sashes with horns flanked by doors, the one on the left gives access to the Banking Hall which is at the rear of the building and has a six panel door in an architrave surround with a rectangular light over and a small hood on brackets. The windows and the other door have matching architrave surrounds and cornice heads. The right hand door is secondary and gives access to the Bank Chambers (2 Commercial Street) above. The first floor has four matching three over six sashes in architrave surrounds with bracketted cills. Balustraded parapet above with a tall ashlar stack with weathered head visible at either end.
Side elevation has a full height grooved hollow pilaster at the front corner. The rest and the rear are yellow brick with ashlar dressings, with the Banking Hall having a large Venetian window on the rear elevation. Cross framed windows with cornice heads on the side elevations. The falling ground on this side shows a lower storey in Pennant stone with the bank vaults etc.

Interior of the ground floor altered at the front, but the rear Banking Hall survives with low segmentally vaulted ceiling.

A particularly good and unaltered example of the Midland Bank house style from just before WWI.