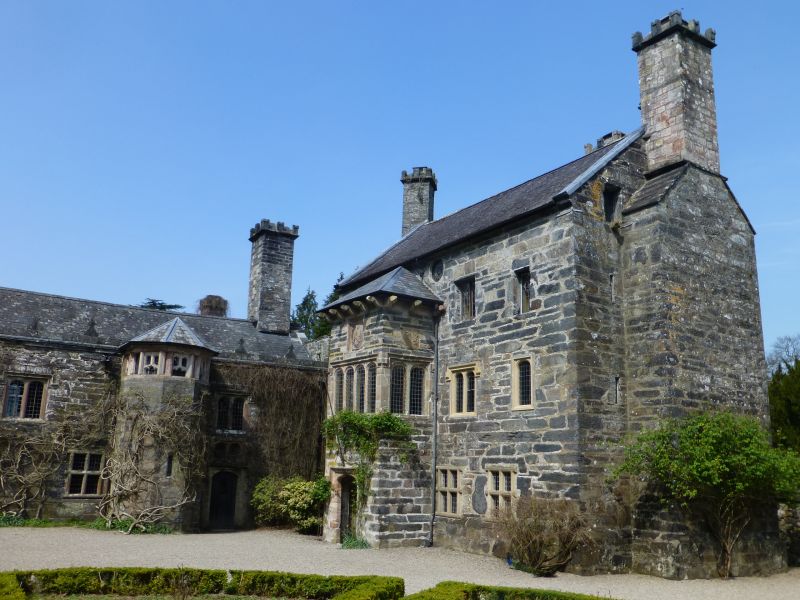 Location: Located approximately 1km S of Llanrwst at right-angles with the B5106 (Gwydir Road).

An ancient site, established as a gentry residence by the C14. At the end of the C15 the house was bought by Meredith ap Ieuan ap Robert, a Lancastrian veteran from S Caernarvonshire, who appears entirely to have rebuilt Gwydir at the turn of the century; the surviving hall range and adjacent storeyed solar tower belong to this primary phase. Meredith's son and heir, John adopted the surname Wynn, thus founding a dynasty who until the close of the C17 were to dominate Caernarvonshire in terms of politics and patronage. It was at Gwydir that Sir John Wynn, the first Baronet wrote his famous `History of the Gwydir Family,' at the turn of the C17, a work of seminal importance for the study of early modern Wales. Following the Dissolution, building material from the Cistercian abbey of Maenan became available to the Wynns, and elements from this source were re-used in additions carried out by the first John Wynn c .1540. John's son Maurice Wynn (d.1580) married the famous Katherine of Berain, cousin of Queen Elizabeth and `Mam Cymru,' who lived at Gwydir in the 1570s and 80s. The first Baronet (1553-1626) greatly enlarged the house towards the end of the century, and in his updating of the pre-existing house, he employed a characteristic Flemish-inspired Renaissance style, quoted from the house of his uncle, Plas Mawr, Conway; the characteristic cross-windows in particular, reveal this influence. The Gwydir estates passed through marriage in 1674 to the first Duke of Ancaster, and remained in the possession of the Willoughby De Eresby family until 1921. Most of Sir John's additions were swept away c.1816 and around 1828 Lord Willoughby De Eresby made some minor alterations (mainly to openings) and added a W (kitchen) wing; these alterations appear to have involved Sir Charles Barry, architect of London, some of whose plans and designs have survived. The Solar tower and W wing suffered fires in 1912 and 1922 and Gwydir subsequently underwent some restoration (post-war), which included the inappropriate re-location of a number of internal elements. A full restoration programme is currently underway (February 1996) which will in due course include the restoration of some of the historic interiors removed earlier this century.

Extensive and irregularly-planned house in late Perpendicular Gothic style with some late C16 Renaissance detailing; of roughly J-plan, its principal elevations face SE (courtyard side) and NW. The primary blocks, the hall range and Solar Tower, stand at right-angles with each other facing SE and SW respectively in to the courtyard. N and W wings join the hall range at either side forming a `U' with it to the rear; the Solar Tower is connected to the hall and N ranges by an L-shaped addition, extruded in the angle on the NE (terrace) side. The tower is of three storeys plus attic (originally Four); the remaining ranges are of 2 storeys. The house is constructed generally of large squared slate-stone blocks (ashlar to the main faces) on a chamfered plinth; slate roofs with leaded parapet gutters behind characteristic finialled parapets to all ranges save the Solar Tower. Eleven tall ashlar chimneys, all at gable ends except one lateral chimney to the rear (terrace side) of the tower; these have distinctive crenellations of carved slate above the capping. .Stone-coped gable parapets throughout, with shaped kneelers to the Solar Tower. Sandstone dressings to openings, mostly mid and late C16 to the Hall and Solar Tower ranges, and mostly c.1828 to the N and W wings; these in imitation of the latter. The Solar Tower has a large storeyed porch, the lower section of which is probably mid C16 and relates to the alterations carried out by John Wynn ap Meredith; large Tudor-arched opening with stopped-chamfered reveals, eagle and lion relief carvings to the spandrels, and a moulded, returned label. The label stops are carved with the initials I and W (for Iohannes Wynn). The porch appears to have been heightened at the end of the century to create a `wrap-around' glazed bay to serve the first-floor Great Chamber; this has a 4-light window with arched-headed, leaded lights to the front and 2 light windows to the sides; moulded, returned labels. Large square-framed, moulded recess above, containing a sculpted heraldic cartouche with the Wynn eagle. Pyramidal slate roof with oversailing eaves supported on heavy, shaped corbels with faceted ends. Original (though some altered) window openings flank the porch on 3 floors, one to the L and 2 to the R in each case; two C19 occuli flank the porch roof under the eaves. Full-height square stair projection to rear with coped and kneelered gable. This is an addition of c.1540 and includes a large proportion of material re-used from Maenan Abbey; later C15 ogee tracery windows on 3 floors. To the L of the stair tower, a large lateral chimney with projecting, gabled breast. The W end chimney is gabled and diagonally off-set at the top; it surmounts a former garderobe projection. The hall range has a semi-octagonal stair projection to the R of centre on the courtyard side, re-used from Maenan, apparently in its entirety, c .1540. Ogee tracery windows to the top, as before and a blocked 4-centered-arched entrance to the SW face. Early C20 Tudor-style entrance to R. Gabled end chimney to L gable, corbelled-out at first floor and gabled, moulded and diagonally off-set. Cross-windows as before to ground floor, and arched-headed leaded windows of 2 to 4 lights to the first. Similar entrance to NW (Dutch Garden) side with cross-windows to R, as before, and two 2-light mullioned windows to L, on ground floor. Twin and single light cusped-headed Gothic windows to first floor; most windows on this face have been slightly enlarged.
Mid C16 N wing, raised late C16; the W wing is a C19 balancing copy of this, built to house a kitchen. Similar twin and single-light Gothic windows to ground floor, mostly C19, though some possibly late Medieval in the earlier block. Arched, ovolo-moulded windows, twin and single-light to the first floors, again C19 copying the original in the case of the W wing. Primitive figurative gargoyles appear on each gable end, 2 to each; these are probably medieval. A mid and late C16 gabled cross-wing adjoins the later W wing, facing the courtyard. Mid C16 Tudor entrance with I.W initials and spandrel carving as before; boarded and studded door. First-floor C19 oriel window with stone roof. Further mid-C16 entrance to Terrace and a plain arched service entrance with label to SW face of W wing.
Adjoining the western gabled cross-wing on the road side is the main gateway. This consists of a large chamfered Tudor arch with I.W initials and carved heraldic shields (bearing the Wynn arms) to the spandrels; carved lion supporters as label stops. To the L of the arch a carved datestone with the date 1555, and to the R of the entrance, a similar stone inscribed: `Rd (for restored) 1828.' Further carved arms of the Wynn family above. Stepped coping to wall above arch with a later C16 re-set stone trefoil finial of `Gwydir' type; this also bears the I.W. monogram. Large rubble piers project outwards flanking the gate; stone benches to the inner sides. Adjoining to the R a single-storey square gatehouse block;.flat roof with parapets as before. Entrance with boarded door and adjacent cross-window to NW (inner) face and slit-light facing road; C20 rubble extension to SE.

Composite boarded and studded oak door to Solar Tower including a smaller, re-used early C19 Neo-Norman wicket door similar to those at Penrhyn Castle; Tudor-arched, chamfered primary entrance. C20 ceiling re-using stopped-chamfered and moulded beams and joists of C16 and C17 character. 3m wide fireplace to R gable end with vast chimney flue; broach-stopped chamfered reveals, in part mutilated. There is evidence for a former mural stair to the L of the fireplace. Composite staircase to L end including mid-C18 oak dado panelling and moulded rail, C17-C19 strapwork newel posts and turned and twisted C19 balusters. Tudor-arched, chamfered doorway to rear, opposite entrance, originally external and since the mid C16 giving access to the rear stair tower. This has a four-storey newel stair, re-used, and probably originally one of the W end or transept stairs of the abbey church at Maenan. Further primary fireplaces to upper floors.
Ground-floor hall (originally services) with primary entrance to garden side and opposing entry to courtyard, since late C16 a window. To the L of this was originally a post-and-panel partition screen which is now repositioned and fragmentary, against the L end wall. Heavy beamed ceiling with broach-stopped, chamfered main and secondary beams and stopped-chamfered joists. Timber-framed end wall to R with wide chamfered opening to later C16 inserted fireplace and chimney. Above the fireplace and on one wall are heraldic plasterwork badges similar to those at Plas Mawr, Conway and Maenan hall, both of c.1580. These sections are original to Gwydir, though they appear to be repositioned, probably mid C20. Large slate-slab floor, mostly C16; C17 dado panelling to much of SE wall. Spiral stone stair with worn steps to Hall of Meredith on first floor. The stair ceiling is original with moulded beams, carved foliate and heraldic bosses and crenellated brattishing. C16 carved, boarded door with contemporary decorative ironwork, raised slightly in the 1820s. Upper hall with arched-braced collar trusses, stopped-chamfered purlins and 2 tiers of cusped windbraces. Primary end fireplace with chamfered reveals and stopped-chamfered oak lintel. Carved and moulded C16 and C17 material survives re-located in several places throughout the building, as do various sections of small-field dado panelling..Cellars to N and W wings.

Listed Grade 1 as a nationally important Tudor mansion house incorporating earlier medieval elements and for its significance as the seat from c.1500-c.1674 of the notable Wynn family.