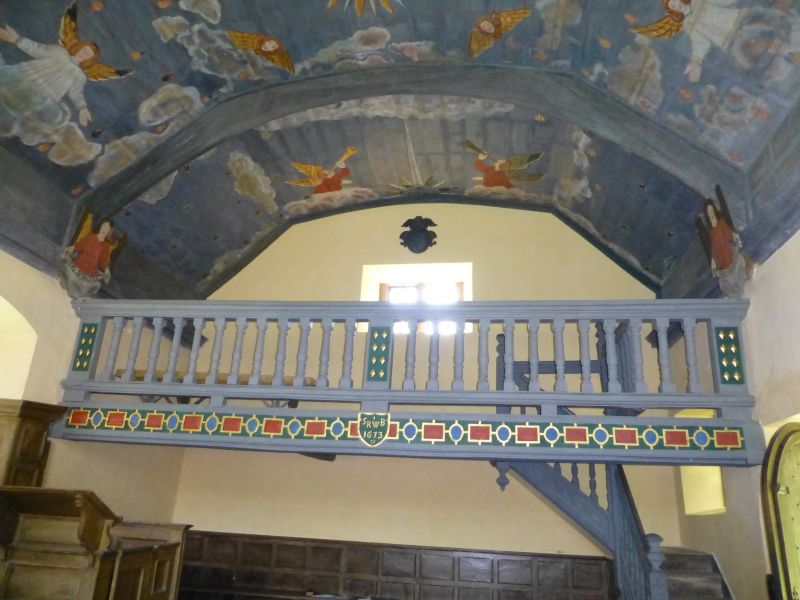 Location: Strikingly located on an elevated plateau immediately above Gwydir Castle and NW of the Carreg-y-Gwalch; adjacent to Gwydir Uchaf.

Built in 1673 by Sir Richard Wynn, fourth Baronet of Gwydir as the private chapel to Gwydir Uchaf, the preferred family residence by this date. The baronet died the following year and may not have seen its completion. The chapel was recorded in 1690 as being endowed with a salary of £4 per year, generally given to the headmaster at the Llanrwst school. Regular services ceased c.1920.

Rectangular gabled chapel in restrained C17 Gothic style; constructed of fine sandstone ashlar on a rubble base, with alternate slatestone quoins used decoratively on the E gable. Original roof of small, thick, graded slates with stone ridge and overhanging eaves; exposed rafter ends. Coped gable parapets with rounded kneelers; ovolo-moulded string-course at base. Simple gabled bellcote at the W end with later bell (dated 1752). On the S side there are 2 large windows each of 3 plain lights with a segmental arched head and jambs with a continuous recessed chamfer; these have splayed stops decorated with a raised heart. Oak frames and mullions, ovolo-moulded and formerly plastered to imitate stone; leaded glazing. On the N side is a round-arched doorway with continuous ovolo and ogee moulding with splayed stops containing lozenge motifs. Original studded oak door with applied border and projecting Jacobean-type impost and key motifs; contemporary decorative strap hinges and latch. Above the doorway is an inset stone panel bearing the raised letters: SRWB (for Sir Richard Wynn Baronet), and the date 1673, both contained within a shield and flanked by lozenge decoration. To the L a window as before and to the R of the door a 2-light window with flat wooden lintel (replaced) and mullion as before. Beneath this, steps lead to a slightly elevated path around to the W gable. The W window is similar. The E window is a large tracery window with pointed-arched head containing 4 lights with segmental heads and 8 plain upper lights; mullions and reveals as before.

Continuous nave and chancel spaces and collegiate liturgical arrangement of box pews flanking a central aisle. W end gallery with moulded handrail and turned balusters to full-width balustrade. This has lozenge decorated panels to centre and at ends and is supported on a massive beam enriched with carved and polychromed strapwork decoration; central shield with carved monogram and date, as before. The gallery is accessed by a stair of 2 straight flights against the N and W walls. This has faceted strings and turned balusters, with carved, square newels with geometric finials and pendants. It is possible that this is an earlier domestic stair re-used, though at the time of building. Contemporary softwood panelling to all walls, of mostly three-quarter height with moulded cornice and small, plain panels; that to the W end, forming a panelled dado, is perhaps later. Box pews to N and S walls with plain fitted benching. Some rearrangement of the fittings has taken place, particularly of the pulpit, to the centre of the S wall. This contains some bevelled C18 panels and it, together with the reading desk adjacent, may have been rearranged at this date. Affixed at the corners of the wall-panelling are finely-carved limewood cherubs and attached to the pulpit are slightly inferior oak figures, nevertheless also of late C17 type. A raised platform beneath the E window formerly contained the altar and is enclosed by contemporary oak communion rails with tuned balusters and square corner posts; central gate. Above the Pulpit on the S wall is a framed contemporary hatchment depicting the Royal arms of the Stuarts with the C2 R monogram of King Charles II; fine carved cartouche to upper W wall with wreath decoration and supporting cherub figure.

4-bay arched-braced collar roof, notable for its fine naive painted decoration. This consists of a biblical figurative cycle of some theological complexity, with Baroque angel figures flanking central depictions of the Trinity and the Tetragrammaton, all set in a fictive celestial background. The paintings are executed in a glue/size medium and are executed on the boarded wagon vault of the roof; at the ends of the principals at wall plate level are 2-dimensional painted angel figures, cut out of panels and holding scrolled texts of the Great Doxology. In their primitive execution and bold composition the paintings can be paralleled with similar contemporary examples at Staunton Harold, Leicestershire, of 1653, and Bromfield Priory, Shropshire, of 1672. The floor is flagged, with a diagonally-laid section in front of the altar plinth.