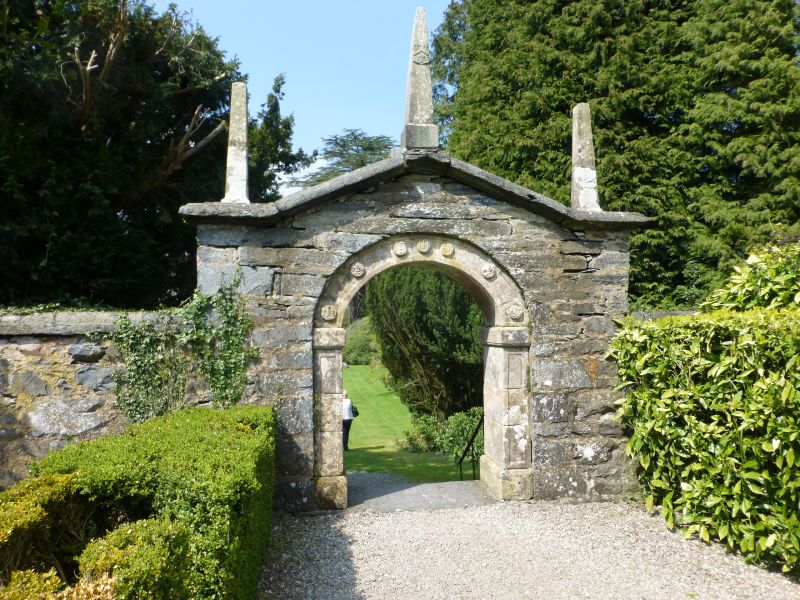 Location: Located at the NW end of the raised terrace at Gwydir Castle and giving access to the Dutch Garden.

Late Elizabethan garden arch in restrained Classical style, with attendant stretches of garden wall. These are survivals of the important pleasure gardens known to have existed at Gwydir in the late C16 and early C17. The arch has the initials and heraldic badges of John Wynn (1553-1627) who was knighted in 1606 and became North Wales' first Baronet in 1611. Work is known to have been carried out in the gardens in the 1590s (a summerhouse apparently being erected in 1592 and a pigeon house in 1597) and appears to have incorporated terracing, a labyrinth and perhaps a water feature. In 1604 a new summer house, Gwydir Ucha, was built on the hill overlooking the castle and Sir John appears subsequently to have had less of an interest in the primary `lower house.' This evidence, together with the fact that no reference is made in the carved initials of the knighthood or baronetcy would suggest that these elements are pre 1606, and probably likely to be of the 1590s.

Of slate rubble, originally rendered (traces survive) with pink/buff sandstone dressings and large dressed slate-stone coping slabs. The arch is approximately 1m in thickness and 4m high. Fine sandstone inner arch recessed slightly within round-arched opening; simple bases and imposts and slightly sunk-panelled treatment to the sides. The voussoirs to the Dutch Garden side have plain projecting roundels, whilst those to the terrace side are carved; I.W initials flank a carved eagle at the top, all contained within shields, whilst to the sides appear the fleurs-de-lis and lion rampant heraldic badges which complete the components of the Wynn arms. Shallow pediment above, to the centre, with rounded and stepped edging to the capping stones. Flanking this are sandstone obelisks (reduced in height) on plain bases, with a further obelisk at the apex of the pediment. The ground level is lower on the Dutch Garden side, and there is a stepped descent down to it via 6 slate steps; low moulded sandstone strings with simple projecting arched ends.

The wall steps down on either side of the arch and, to the L, runs for approximately 5m where it returns at a 90 degree angle to join the corner of the castle's N wing; coping as before. To the R the wall continues for some 7m where it steps down. The wall is at its highest at this point (3m on the Dutch Garden side), and the end coping stone is neatly finished. The stepped-down section is half the height and has plain capping; the centre is part collapsed. This continues for another 7m before terminating in a large square pier with plain capping.