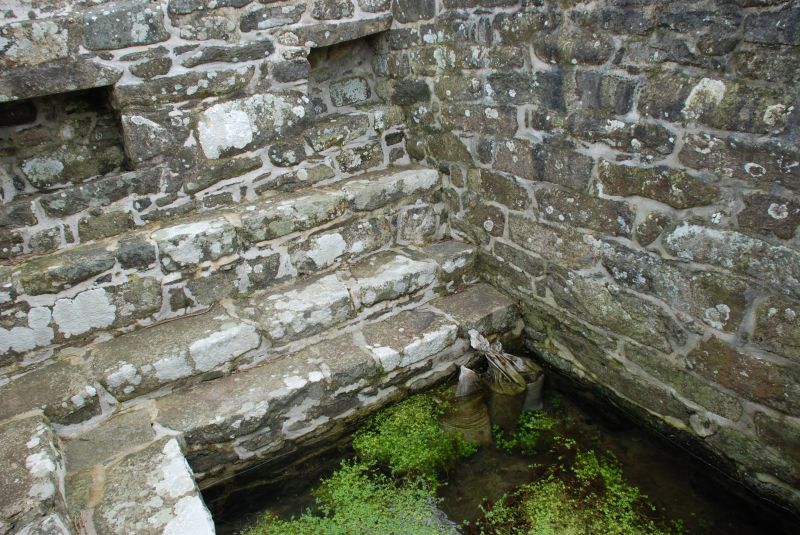 Location: The well stands at the SW end of the village, close to the main road, and reached by a short path from the main road to Llanaelhaearn.

The well is of early origin, and apparently honoured through the medieval period. The surrounding walls were probably reconstructed in the late C18 or C19. It was observed by Leland, (Itinerary C16) and had a high reputation for the part it could play in obtaining a cure for epilepsy. The afflicted would bathe in the well and sleep overnight on a bed of rushes placed on the saint's tomb in St Beuno's Chapel. The waters were also taken, with the additions of scrapings from the columns of the chapel, to cure eye problems. It is reputed that heifers were once sacrificed at the well - an interesting survival of pre-Chrisitan ritual.

A square stone lined well at the foot of sloping farmland, surrounded on three sides by 2 steps and a continuous stone bench built against the NE and SW enclosing stone walls. These are approximately 2m high, perhaps rebuilt, and have triangular copings. The entrance faces NW to the road and is furnished with a C19 iron gate approached by 4 steps.

There are three rectangular recesses in the side walls, probably for the bathers' clothing and possessions. The well measures 2.3m square, and the water, which still flows, is c350mm deep, overflowing through the NW wall to a gully running down to the roadside.

Included at grade II* as a substantial structure which survives virtually intact, where the internal bathing arrangements can be clearly appreciated; an excellent example of a holy well of Wales (with associated pre-Christian traditions) and a well documented history of use up to as late as the late C18.