A Grade I Listed Building in Llanengan, Gwynedd 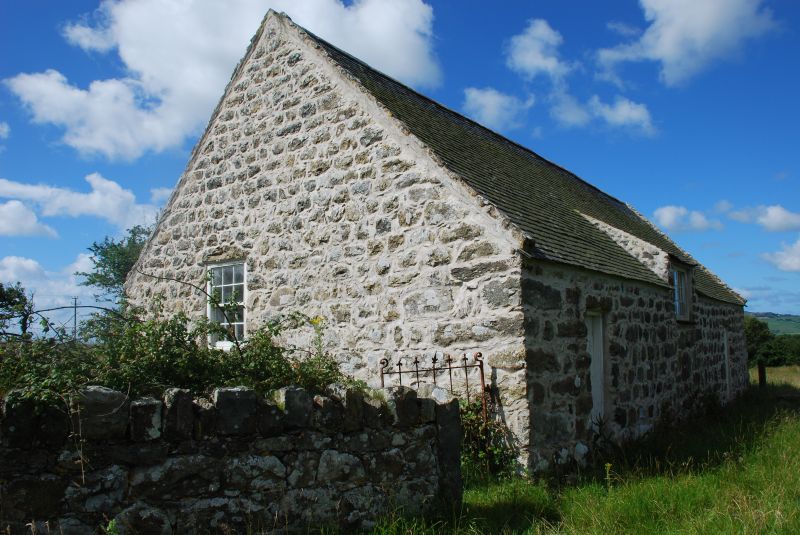 Location: Situated in field near Ty Bricks reached by lane and track running W from B4413 from point some 700m E of Nanhoron.

Probably the earliest surviving nonconformist building in North Wales, built 1770-2. The first chapel built in the Llyn outside Pwllheli, preaching began about 1740. John Williams of Saethon and Mrs Edwards of Nanhoron were prominent supporters, and the chapel was built on Nanhoron land, possibly converted from an existing outbuilding. The chapel may have been altered shortly afterwards as there are signs of a central door, behind the present pulpit, but retains an interior almost uniquely redolent of the early rural chapels, still earth floored and with box pews in a long barn-like space. The chapel remained unaltered as a new chapel was built in Mynytho in 1872. Carefully restored in 1956-8 by T Alwyn Lloyd & Alex Gordon. It is marked on the 1839 Tithe Map on land owned by Mary Williams, with another building of similar size parallel.

Exceptional interior with whitewashed low plastered walls, beaten earth floor and open roof of 5 pine pegged collar trusses. Pews are arranged in two rows with axial passage, fielded-panelled box pews with doors. W end has 3 stepped pews facing down length of chapel, double and single block with passage between and at N end. The long row along the rear wall is in 2 blocks, one section facing W the other E, the pew between larger with benches on 3 sides. The front wall has pulpit in window recess, plain square pulpit with curved angles. 4-panel front and 2-panel sides, the right side a door. Projecting book-rest with candle-holders. Bench seat within with boarded back and steps up to right. At ground level in front a panelled enclosure with bench seats and table. Large box pew to left, to right 4 box pews, the last with opposed benches. Two simple turned-wood candelabra on pulleys.

Graded I as an exceptionally early nonconformist building with one of the very few surviving early chapel interiors.