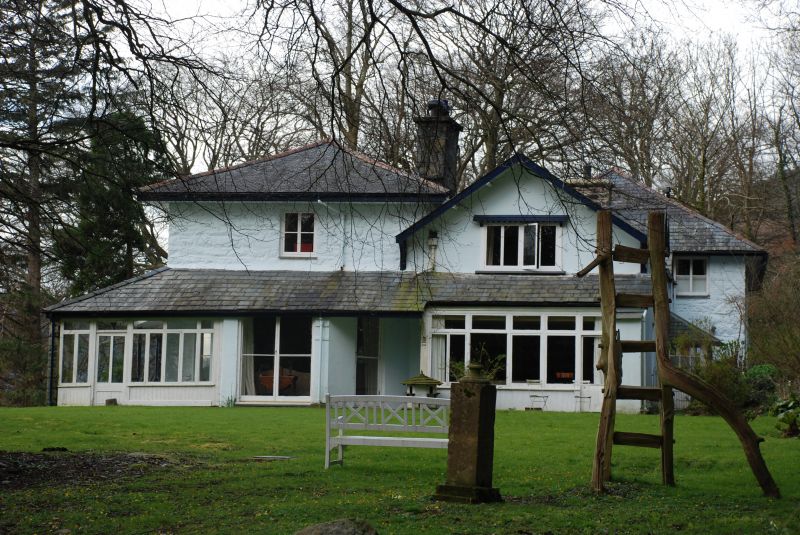 Location: In its own grounds and reached by private drive on the N side of the A498, approximately 0.5km NE of Tremadog Market Square.

Built in the first decade of the C19 by William Madocks. Madocks bought a small property on the hillside above his new town of Tremadog and incorporated it into a villa, apparently of his own design. The older part of the house was said to have been used as a billiards room. The villa was enlarged by the addition of a new service wing in the 2nd quarter of the C19, which is shown on the 1842 Tithe map. The house contains a mural depicting the Triumph of Neptune, probably mid C19, restored for the owner Miss Hilda Greaves, by her nephew Clough Williams-Ellis.

In 1812-13 Percy Bysshe Shelley lived here with his first wife Harriet Westbrook, and during this time he finished Queen Mab (1813), his first epic poem. It was later the home of the Greaves family, quarry owners at Blaenau Ffestiniog who leased one of the wharves at Porthmadog harbour. The house was a Steiner School from 1985 to c1999, and is now a small hotel.

A late Georgian 2-storey villa comprising a main house near square in plan and incorporating an older building at the rear, and a later wing with service building set back on the L (W) side. Of blocks of quarried stone laid in regular courses, painted light blue. The main house has a hipped slate roof on projecting eaves and stone stack behind to the R. The 4-window front overlooks Tremadog, Traeth Mawr and Porthmadog and has a lean-to veranda with slate roof on iron posts, most of which are replacements, wrapped around the sides. The central recessed half-glazed door has Gothic glazing bars, under a fluted panel in place of a former overlight. On the L side is an added late C19 canted bay window with French doors. On the R side are French doors. The upper storey has 2-light casement windows.

The R (E) end wall has a similar canted bay window with French doors, below a 2-light casement in the upper storey. The veranda is infilled with a boarded and glazed screen on the L side. Further R is the gable end of the earlier building, which has lower eaves than the main house. It has an added lean-to in the lower storey with a wide 4-light window and half-glazed door at the R end. Above it an early C20 4-light window under a deep bracketed hood. The short L (W) return wall of the main house, in front of the service wing, has a replacement window in the lower storey and 2-light casement window above, to the L of which is an external brick stack.

Set back to the L is the 2-storey 4-bay service wing, under a hipped roof of graded slates on projecting eaves, and stone end stacks. The upper storey has 2-light casements similar to the main house. The lower storey has a lean-to veranda on rustic timber posts. The entrance R of centre has a half-glazed panel door under a 3-pane overlight. To the L are 12-pane hornless sash windows. To the R is a brick lean-to inside the veranda, with modern casement windows. Part of a former coursed stone garden wall abuts at the L end, beyond which is a lower 2-storey 2-window extension, formerly housing more service rooms, of whitened coursed rubble stone under a hipped roof. In the lower storey is a half-glazed boarded door and a link to a formerly detached and restored small stone outbuilding. The upper storey has two 2-light casements.

At the rear is the original gabled building, of scribed roughcast, slate roof and stone stack to the R. Its central hipped half-glazed porch has a half-glazed door, to the R and L of which are wooden cross windows. Further R a similar 3-light mullioned and transomed window and further L a replacement window in an earlier opening. Above the entrance is a 2-light casement under a gable. This and a gabled 3-light casement window to its L have inserted vases in the gables. Further R is a 12-pane sash window turned on its side to slide horizontally.

The 4-bay service wing projects behind the main house. It has a fielded-panel door to the L of centre under an overlight, flanked by 12-pane hornless sash windows and with a shorter 16-pane hornless sash window to the R end. In the upper storey are 2-light casement windows similar to the front, but the centre-R window is blind. Return walls have similar windows. The extension of the wing has a 2-light window upper L, two 2-light windows in the lower storey and a lean-to against the end wall.

The central entrance hall has a quarter-turn stair with renewed fretwork C17 style balusters and moulded newel. The L-hand room retains a mural depicting the Triumph of Neptune, but at the time of inspection it was concealed for its protection behind plasterboard. In the upper storey the landing and a small dressing room above the entrance have segmental plaster vaults. The R-hand room has a shallow quadripartite plaster vault and the L-hand room a shallow cambered plaster vault. In the rear of the main house the earlier building retains 2 collar beam trusses, superimposed on one of which are later principals at higher level, indicating that an original farm building has been heightened.

Listed grade II* as an early C19 villa retaining original character, and for its literary association with one of the foremost Romantic poets.