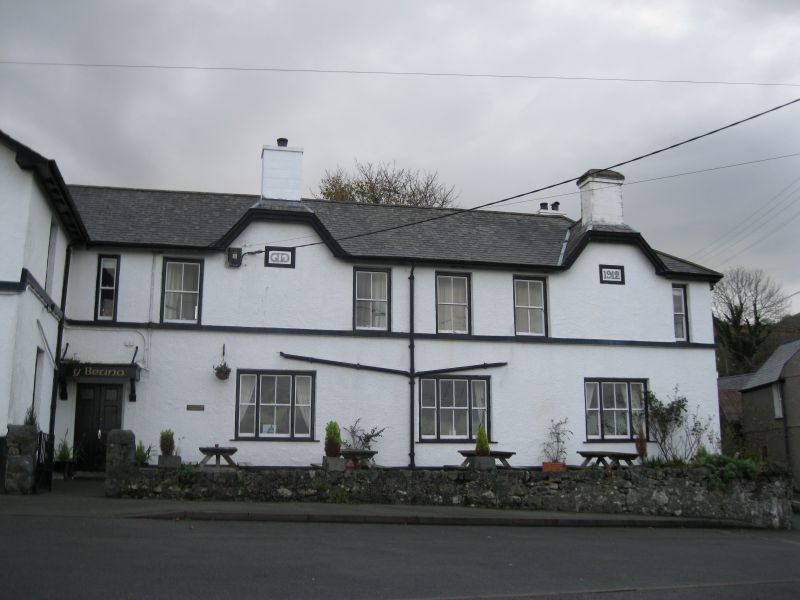 Location: The inn stands beside a raised section of the old line of the main Caernarfon to Llanaelhaearn road, in the centre of Clynnog village.

The building is a large coaching hostelry built to serve travellers between Caernarfon and Pwllheli and the W end of the Lleyn peninsula. It has been variously known as The New Inn, c1840 when the landlord was Robert Thomas, The Newborough Arms, and until recently the St Beuno Inn. Although it probably has C17 origins, the present building is largely of the late C18, but has the external character of its early C19 remodelling. Stabling and services were added to N, perhaps also c1820. It was extended to the S by a large 2-storey wing dated 1912. Some modern alterations.

Built of stone rubble, part roughcasted, and whitewashed, slate roofs with rooflights to rear and wide boarded eaves. Rendered chimney stacks. Two storeys throughout. The building is dominated by a wide-spreading gable facing the road, with deep eaves on purlin brackets, the apex hipped for a central stack. Symmetrical 3-window central block with 12 and 16-pane sash windows, casement window to the attic, and gabled porch to entrance with paired timber columns, pilasters and 6-panel door with overlight. 1st floor sill band continues around the 1-window return elevation to right and across the 2 3 1 window 1912 wing. This has horned sash glazing and includes a hooded entrance in the angle and 3-tripartite windows to the ground floor; two half-hipped gables with chimneys over. Lean-to at left side of central block runs back to low 2-storeyed L-plan wing with 2-window in-line elevation; 12-pane sashes to first floor and tall chimney to the left. Three-bay former stables are set forward to left, converted by infill of the cambered arch ground floor openings, retaining impost and small-pane sliding sash windows above. In front of this is a modern frontage to a 5-bay service range, running N, with multipane metal-frame windows; this forms a lean-to on to the side of the cross range to the stable-block. On the N end the building has a narrow U-shaped yard formed by this cross range and a parallel, single storey, rubble range; further small-pane sliding sash windows and massive stone lintels. Variety of window types to part slate-hung rear; 3-gables to 1912 wing.

Included as an ambitious, purpose-built coaching inn largely of early C19 character though with earlier origins. A prominent building at the centre of the village.