A Grade I Listed Building in Llanddaniel Fab, Isle of Anglesey 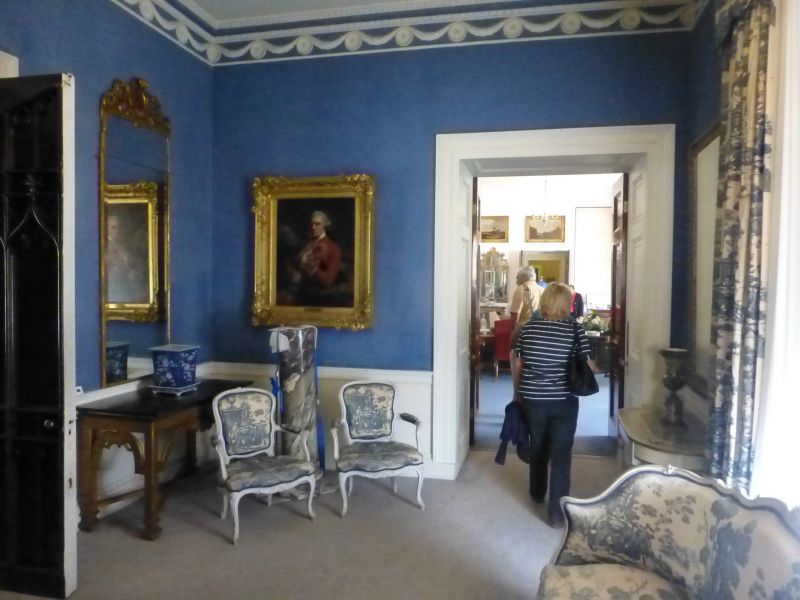 Location: Located 1.5km SW of Llanfairpwll on the A4080. Sited on an artificial terrace alongside the Menai Strait, overlooking the Snowdonia mountains to the E.

The present house at Plas Newydd is largely a C18 Gothick mansion, developed in three main phases, incorporating an earlier building, and with significant early C20 remodelling. The history of the house can be traced in documentary sources from c1300, but the first recorded house on the site was a hall-house built in the early C16. It was to this house that Sir Nicolas Bayly added a semi-circular turret in the middle of its E front, and an octagonal tower at the SE corner in 1751-3: Pictorial evidence suggests that these additions were accompanied by remodelling work to give a consistent picturesque Gothick style to the house (including embattled parapets, arched and quatrefoil windows as depicted in Moses Griffith's watercolour of 1776). This Gothick character was taken further in subsequent phases of work: The first of these was undertaken between 1783 and 1786 by John Cooper of Beaumaris, for Henry, Lord Paget (son of Sir Nicolas Bayly) and involved the addition of a second octagonal tower to the N end of the E front (thus making this elevation symmetrical), and remodelling the rooms behind this facade. Pictorial evidence suggests that the house was re-windowed at the same time, again in a spirit of regularity and symmetry. Between 1793-99, Lord Paget employed James Wyatt and Joseph Potter of Lichfield to create an entirely new entrance front to the W (on the site of the original great hall), with a series of interiors in the Neo-classical and Gothick styles. Potter added the N service wing in 1805, completing this phase of development. The final phase of change to the house took place in the 1930s for the 6th Marquess, by H.S. Goodhart-Rendell, architect: The effect was to give a more stripped down appearance by removing the battlements from the parapets, shortening the pinnacles; the house was again refenestrated with small paned windows. The north wing was completely re-built, with the Gothick windows of the chapel being replaced by square-headed windows to match the main block. The theatre was converted into a long dining room, decorated by Rex Whistler between 1936 and 1940. On the W side, the wing to the S of the Music Room was altered, and the domestic wing was brought forward, lessening the distinction between the two buildings and altering the symmetry of the building. A screen wall was also built on the N side of the Music Room, designed by Rex Whistler. Much of the house interior was re-decorated in the 1930s by Sybil Colefax. The house was sub-divided in 1947 when the H.M.S. Conway Training School was established at Plas Newydd, with the N wing being used by the school, as well as the stable block and harbour. In the 1950s a training school was built to the N of the house, now called the Conway Centre. The school is now leased to the Cheshire County Council as an education centre, including the stable block and N wing of the house. In 1976 Plas Newydd was given to the National Trust by the 7th Marquess of Anglesey.

The house is aligned N-S, with the main living rooms facing E overlooking the Menai Strait. Main house 3 storeys, built over a double basement. Walls of limestone ashlar masonry with plinth, moulded 1st floor sill band and moulded cornice below plain parapet (formerly with battlements). East front: symmetrical main block with 3-bay advanced central block (semi-circular bay and flanking windows), stressed by angle pilasters surmounted by Tudor caps; with single window range (having 4-centred arched doorways) separating this from the full-height canted bays to either side, and there is a further 9-window range to the right. Windows are 1930s recessed 24-pane sashes to ground floor, 24-pane casements to 1st floor, 20-pane fixed-light casements to 2nd floor, all with voussoir lintels with moulded hood bands. The northern continuation of this range is a 3 storey, 9-window range (replacing early C19 chapel with 3 Gothick windows) of squared rough-faced limestone, plinth, plain sill band at 1st floor and below parapet, slate roof. Domestic buildings at N end raised to 2 storeys, lower storey of rubble, upper of squared limestone. Original horned sash windows - 12-pane to 1st floor and 16-pane to 2nd.
South return front: asymmetrical design with 3-window range and canted bay to right (the original octagonal tower).
West entrance front: Built 1797-9 by Wyatt and Potter, extending the original hall house. Originally designed as a symmetrical composition with 2 entrance porches around a Gothick windowed hall, with 3-window flanking wings. The symmetry was disrupted in the 1930s when a 3-window range was added to the N (the original line was set back from the main block), linking the main block with the 5-window service wing to the N. Limestone ashlar masonry with plinth, moulded cornice below plain parapet (formerly with battlements). Central slightly advanced 2 storey, 3-window hall (called 'The Music Room') with 3 tall Gothick windows breaking 1st floor sill band. Similar traceried windows with moulded arched hood band and moulded sill band to elevated 1st floor. Flanking octagonal buttress piers with Tudor caps on angles of return and at either end of main block. To S is 3-window range, with 2 windows blocked on each floor. Gothick porch with 4-centred arch and battlements to S; the balancing porch in the block to the N of the Music Room was removed in the 1930s. Two window range to N of Music Room has wide square-headed entrance on S side with mouldings and Gothick detailing. Narrow arched windows to N. Moulded 1st floor sill band and cornice. Three window range to N of main block, linking main block to 5-window range to extreme N (which formed the service areas, partly built on the site of the original stables). Ice house and apple store in yard to W. Running at right angles from the N side of the Hall is a screen wall designed by Rex Whistler in the 1930s, with voussoir arch with projecting keystone at either end.

Plan comprises 2 parallel ranges of rooms, each en filade, and divided by a spinal corridor. The easternmost range represents the earlier C18 house, with the western range largely the work of Wyatt and Potter in the 1790s. This range is broadly symmetrical in layout, with the music room flanked by the stair hall to the left, and the Gothick hall to the right. This, the main entrance hall, rises through 2 storeys with a gallery at one end; fine plaster fan-vaulted ceiling. The Music room also has a plaster fan-vaulted ceiling, and ornate carved chimney breast, flanked by plaster figures of Medieval knights. The N entrance led into the Neo-classical stair hall and anteroom to its N. Cantilevered staircase with wrought-iron balustrade leads to landing with fluted and marble-painted Doric columns. E wing interiors also substantially as remodelled by Wyatt c1795 (though in plan the result of the earlier phases). Decorative schemes here and in the first floor rooms are largely the work of Sybil Colefax in the 1930s. The N wing was entirely remodelled 1935-6; its principal feature is now the Rex Whistler room which contains the artist's last and largest mural, completed by 1940. The mural is a Georgian landscape fantasy based on views from Plas Newydd over the Menai Strait and Snowdonia, mixed with classical architecture and personal recollections.

Listed grade I as an important example of an C18 country house, notable for the early use of gothick in the remodelling and extension of an earlier building in the 1750's, but especially for the coherent remodelling of the house by Wyatt and Potter, combining neo-classical symmetry with gothick detail, and including interior work of exceptional quality. The C20 work to the house is also of consistent character, and the Rex Whistler work is particularly notable.