A Grade I Listed Building in Angle, Pembrokeshire 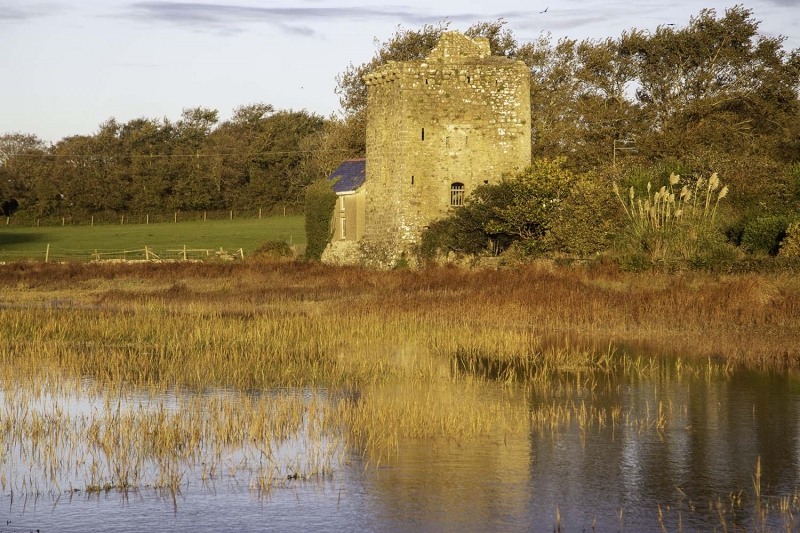 This pele tower is traditionally known as the Old Rectory. Together with Castle Farm and the Dovecote, it stands on the Rectorial Glebe land of the Parish of Angle. It is a type of building which is very rare in Wales and the Marches. It has, however, many parallels in Ireland, where a Statute of 1429 encouraged the construction of tower houses within the Pale. It has been suggested (Fenton) that it was the residence of the Sherbornes, who were Lords of Angle since the mid C14, but this appears conjectural.

It stands at the N edge of a tidal creek connected to Angle Bay. The site was defended by this creek on the S, and moated on its other three sides. Until c.1930 there were remains of a second building with a vaulted undercroft of similar dimensions where the N arm of the moat used to be, and where the kitchen of Castle Farm now stands.

The plan of the house is single-cell, about 3.6 m square, with a vaulted ground storey and a spiral staircase at one corner. The vault is slightly pointed, with a rise slightly less than half the span. The upper floors and roof are missing, but the masonry of the tower is almost complete.
The walls are of local rubble sandstone masonry with the ground storey slightly battered. On the N side the masonry is random rubble but on the other three sides it is regularly built in about 20 cm courses with some small stones to make up course heights. The stair turret projects about 0.4 m on the N and E sides.
The doorway is at first-floor level on the E side. Above the doorway in the second storey are two slits evidently for the draw-chains of a bridge and there are corbels evidently for the support of a hood above these. The doorway is only 1.2 m high and has a segmental arch of late mediaeval appearance. The outside arris of this opening carries a simple large three-quarter round moulding. The backing arch is of two-centred form.

Small square windows, flat-headed, on the S-facing wall overlooking the creek. All other openings are defensive loopholes with interior splays.
The fireplaces of the 1st and 2nd storeys are against the N wall and have a shared flue in the wall thickness. The flue terminates in a tapered circular chimney, which is almost complete. The fireplace for the 3rd storey is against the E wall. All have plain heavy stone bressummers. Garderobe in E wall of 1st storey.
At top there are boldly projecting two-course corbels on all faces except those of the stairs turret, suggesting a parapet walk with machicolations.

Listed Grade I as a very important specimen of mediaeval defensive domestic architecture.
Ancient Monument No. Pe 68, 'The Tower'