A Grade I Listed Building in Tenby (Dinbych-y-pysgod), Pembrokeshire 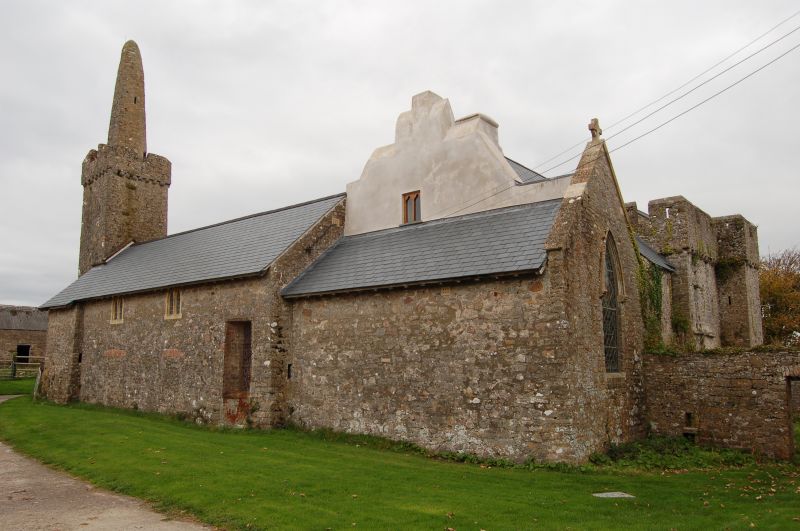 Location: Situated some 300m S of the Abbey, on the W side of the road to the lighthouse.

Extensive remains of a small medieval priory on site of a Celtic Christian community allegedly established in C5 or C6 by Pyro after whom the island may have been named Ynys Pyr. Refounded by the Normans in C12. Robert Fitzmartin, Lord of Cemaes, was granted the island in 1113, and his mother Geva founded the priory as a cell of the Tironian abbey at St Dogmaels (founded by Fitzmartin in 1113-20). The priory, like that at Pill, Milford Haven, remained subject to St Dogmaels and was never large, only one monk being recorded in late C12, 4 in 1402 and 6 in 1504. At the dissolution of the monasteries in 1539 Caldey was valued much lower than the priory at Pill. The buildings were altered to quite a high standard in the C16, although there is no evidence that either the Bradshaws or Philpins, successive owners, were ever resident. The buildings then declined to farm house status, with the house in the former church (and as such are illustrated by R Colt Hoare c1800). The buildings then became the service ranges of a new house built to the N for Thomas Kynaston, owner from 1798. The island was sold in 1867 to J. Hawksley who revived the agriculture of the island, and in 1897 to the Rev W D Bushell, who restored the priory (some restoration may have begun for T S Cunningham, owner 1894-7). The church had had a malt-kiln in the nave and laundry in the chancel, the E range being servants' bedrooms, and the entrance arch a lime-store. Bushell sold the island in 1906 to the Anglican Benedictine community that built the new Caldey monastery 1907-13, but rented the house and priory until his death in 1917. The house was demolished in the 1970s.
Analysis by Neil Ludlow has shown a very complex story of alterations both pre and post Reformation that undo Bushells simpler analysis that the basic monastery survived intact. He thought the W range was guest accommodation over the vaulted entry and a ground floor chamber, the E range the dormitory over kitchen, and the NE tower the prior's accommodation, which he supposed to pre-date the other buildings. He thought a N range, now demolished, may have held a refectory.
Ludlow's sequence is of a C13 church, comprising both monks quire and chancel, the quire wider than the present nave, a vaulted passage N of the chancel with an unvaulted possibly single-storey E range adjoining. A long W range, further W than, and longer than the present range probably existed then. In the C14, phase 2, the church tower and spire, and the Prior's Tower were added. The complex declined and was then much remodelled in the C15-early C16 (phase 3), when the E range had vaults inserted, the C13 W range was abandoned and the present W range, with possibly another range N of the N end stair was built. He dates to a post-1539 phase (phase 4) the first floor of the E range with its mural stair, the chamber at the S end over the chancel (possibly the chancel vault itself), and the addition of the vaulted gate-passage between the C15 W range and the church W end. By 1800 the church quire had been remodelled as a 2-storey house and the rest of the complex was used as farm buildings.

Church and monastic buildings around small courtyard, rubble stone with slate roofs. Church is on S side, nave, chancel and W tower with stone spike spire. Domestic buildings run N with gatehouse on W side and 2-storey E range with NE corner semi-fortified tower.
Pembrokeshire square W tower, 9 m high, unusually splayed out at ground floor N and S sides with sloping haunches and battered bases. Broad segmental pointed W door with stone voussoirs and recessed double boarded doors. First floor flush C14 2-light window with renewed tracery. Cusped heads to narrow lights and small quatrefoil. Single small loop at 2/3 height, corbels to deep embattled parapet, the battlements chamfered, and recessed stone spire some 5.4 m high, leaning some 0.98cm to W. Nave S has stair projection to left with battered base, and then 2 tiny c1900 2-light windows under eaves, 2 blocked rectangular openings with red brick heads below and a large plain rectangular opening (former door) to right with recessed glazing. Chancel is lower, windowless to S and with slate roof partly lean-to against gable-end of E range, which is built on top of chancel vault. Big coped E gable, considerably higher than roof, with C19 coping, finial and hoodmould to big pointed E window, presumably of c1900. Nave N side, to courtyard, has 2 similar c1900 windows under eaves and board door to left. Blocked earlier C19 window to centre with brick head.
Gatehouse range to NW has slate close-eaved roof, except at right end where short rubble parapet and masonry break marks church NW corner. Big first floor corbelled chimney left of centre with renewed circular shaft. C19 square loft opening to left of chimney, under eaves. Ground floor has 2 very small openings to left and segmental-pointed entry to right with stone voussoirs, set in wider blocked entry also with stone voussoirs. Masonry of ground floor continues to left as side wall of demolished further building. E front to courtyard: rough segmental-pointed arch to left (to through-passage but larger than arch on W side) with stone voussoirs, the walling here recessed below 10 close-set rough corbels, the recess stopped at line of right jamb of archway. Above are dove-holes in 3 tiers, some blocked, some with surviving shelves, disposed each side of small stone-traceried 2-light C16 or late medieval window with cusped heads, traces of hoodmould and missing mullion. Facade to right of entry has low arch to undercroft with rough stone vouussoirs, and small rectangular recess with slate head, set low to left. Another rectangular opening at mid-height to right. First floor has dove-holes in 4 irregular rows, C19 casement pair under eaves to left (roughly central to whole range) and square opening set slightly lower to right. N end wall stone outside steps to loft door. Single stone lancet to left. .
E range has prominent rendered S gable on chancel roof of church, dated to C16. First floor small window. Stepped gable coping, chamfered like battlements of tower, small square centre stack. Slate roof has big roughcast ridge stack towards right with stepped N side and projecting capping. W front to courtyard has tiny ashlar rectangular light at first floor just right of chimney. Masonry to the ground floor is considerably disturbed. Centre and left has projection for mural stair, centre full-height with 2 small stair lights at different levels and square opening splayed back to narrow loop, at ground floor. Left projected walling has pointed arched doorway with stone voussoirs set in broad blocked arch, but wall above is set back to original plane, with modern opening to first floor. Rear E is much obscured by ivy. Wall and roof set back at upper level each side of a projection (shown as a chimney gable by Colt Hoare), 2 square-headed openings to left, one to right. Ground floor C19 opening with red brick head to right, another possibly original, much damaged to left.
Prior's Tower has slate roof behind corbelled embattled parapet on N and E with loops in battlements, W side to court has corbels but not battlements. This side may have adjoined lost N block. Stonework is patched, showing line of tall opening in centre. Two ground floor openings with timber lintels. N end has 2 small C19 casement pairs well-recessed under brick heads, at ground level and first floor tall C19 opening with timber lintel. E side has projecting turret to right with similar battlements, small pointed stone window to centre of first floor and C19 door to ground floor with timber lintel.
Attached rear garden wall, possibly C19, rubble stone with doorway in both N and S walls, N doorway pointed.

Church has exposed stone walls. Marked difference between nave (or monks choir) and chancel, and indeed there was no evidence for any opening between, according to Bushell. Chancel has pointed rubble stone barrel vault partly covering top of splayed reveal of E window with medieval hoodmould and stops surviving. Cusped pointed C13 piscina on S wall, medieval splayed lamp recess adjoining, with flue in wall. Plank door in N wall, rendered pointed chancel arch cut through c1900. Cobbled chancel floor.
Nave has thin 5-bay collar-truss roof with wishbone struts. N wall leans in at top as if for vault, but this is the wall thought to have been rebuilt when the quire was narrowed. Door at right end of N wall. Tiny light in SE angle may be old, other windows are c1900. Early C20 plain pine fittings: lightweight W gallery with slats to front rail, stalls each side with high boarded backs, bench seats and front kneelers, the stalls returned under gallery, and slatted gates in chancel arch. Cobbled floor to nave E and W ends. Lobby under gallery with S wall medieval mural stair to tower first floor, with shouldered head to narrow door. N wall has deep recess. Tower has stone vault to ground floor and segmental-pointed recess on S wall. E door into nave pointed with stone voussoirs. Cobbled floor. First floor deep splayed reveals to W window and stone voussoirs to E opening into nave. 2 wooden floors above.

On nave S wall, the Caldey stone, with Ogham inscription of C5-6 date and later Latin inscription and cross on the back and on each edge, possibly C9. E window has patterned glass of c1900 in blue and yellow and monogrammed oval cross in centre. Stained glass S window of St Illtyd by Dom Bede Bailey, c1925. Brass plaque in tower to Rev W D Bushell 1838-1917. Chancel has crude incised cement decorated dado.
W range has stone vault to through passage, the vault different at W end. N door with timber lintel, S door with pointed arch and stone voussoirs. Room to N has timber C19 roof, corbel for lower ceiling on S and W walls and blocked door in N end wall. First floor room has C19 pine roof, and incised cement dado as in chancel. Small lancet light in S gable end.
E range has vaulted kitchen with eroded S end fireplace. 2 pointed doorways on W wall give access to mural stair and to refectory site. Doorway at N end into Prior's Tower. S end square head doorway into small room, former vaulted through passage, the W end blocked with inserted chimney and bread-oven. Inserted S door into chancel. Doorway at head of mural stair is C16 red sandstone Tudor-arched. The E wall fireplace has moulded jambs, possibly reused window jambs.
Prior's Tower has a vaulted basement of about 4.6m by 4.6m divided into 2 by later wall, and an upper chamber. There is no staircase now but there probably was one at the SW corner. The loopholed NE turret was a garderobe. Roof, not seen, may be C15 but reset higher than original. Two king-post tie-beam trusses with concave wishbone struts and longitudinal braces.

Graded I as a small medieval priory with C16 and later alterations, still retaining its courtyard plan on the smallest scale.