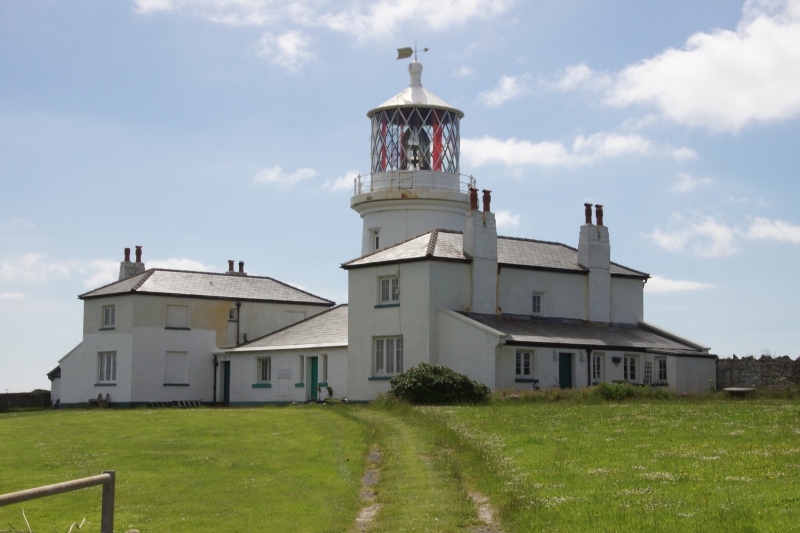 Location: On the S side of Caldey Island, 0.5km approx S of the Abbey.

A painted plaque on the lighthouse records 'Erected A.D. 1828 by the Corporation of Trinity House and light exhibited for the benefit of navigation, January 26th 1829.' The lighthouse was engineered and built by Joseph Nelson, a notable lighthouse engineer from Leeds, who was responsible for the construction of a number of lighthouses in the British Isles. The lantern appears to be a replacement, possibly of 1875 (the date on the associated oil store), together with the optic. The lighthouse serves as a marker for coastal traffic, and displays an intermittent flashing light with 2 red sectors.

Circular lighthouse tower 17.07m high, rising from the hipped roof of a single-storey stores building which is linked by low corridors to the flanking pair of 2-storey houses at right angles. White-painted limestone or render with slate hipped roofs and cast-iron glazed lantern to tower. Tower is 2-storey, tapered, with bold moulded cornice and iron railing around roughcast base of lattice-glazed lantern. Ribbed conical iron roof with ball finial and arrow vane connected to an internal compass. One window each floor on N side with Trinity House arms in relief between, the windows 2-light, with tilting top light. Unmoulded projecting lintels balance the sills. Two blind windows facing S, the lower one pierced by a small circular opening. Tower rises from S roof slope of the stores buildings and curve of tower projects centrally from windowless rear S wall with heavy moulded string continued from eaves each side. Low short walls link to the S ends of the houses, enclosing small yards. N front has centre doorway with side lights in splayed reveals, casement-pair in splayed reveals to either side, and outer 4-panel door to lobbies between the lighthouse and the flanking houses.
Houses are symmetrical framing the centre range, running N-S, 2 storey, rendered, with lean-tos and side-wall stacks on outer walls and principal windows in N and S end walls, 3-light casements to ground floor, casement pairs above (the seaward windows renewed with UPVC in the W house). Blind panels on each floor each end of projecting inner side walls. Outer walls have chimneys with stepped tops to stacks (formerly with octagonal limestone shafts). Tiny central first floor windows, ground floor lean-tos with coped end gables. Two casement-pairs alternated with 2 plank doors originally. E outshut has C20 added lean-to to left. Cobbled N forecourt.

Listed as a very good example of an early Trinity House-commissioned lighthouse complex, designed with a strong symmetry and still remarkably intact.