A Grade I Listed Building in Carew, Pembrokeshire 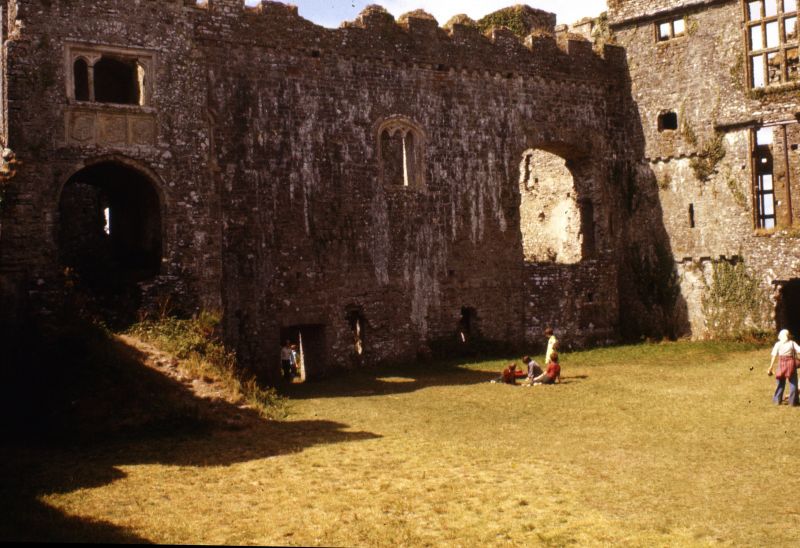 The oldest surviving part of the Castle is a tower thought to have been part of the 'House of Carrio' of William, great-grandson of Gerald of Windsor, referred to in a close-letter of 1212. The house was briefly seized by King John in 1210-11. William's descendant Sir Nicholas de Carew undertook the great late-C13 reconstruction of the castle, producing the inner and outer wards which are still the basis of the plan.

In about 1480 Sir Edmund Carew sold the Castle to Sir Rhys ap Thomas, commencing two centuries in which it was out of Carew family ownership. Sir Rhys was greatly enriched for the support he had given to the future Henry VII, and he started to develop the Castle on lines more palatial than military. He died in 1524, having radically remodelled the Great Hall and having built the Lesser Hall and the Dining Room in the E block. It was at Carew Castle that he staged the Great Tournament of 1507, 'the most magnificent entertainment in the history of Wales', the contemporary account of which is reprinted by Fenton. With the execution of Rhys's grandson in 1531 the Castle passed to the Crown, and thence in 1558 to Sir John Perrot. Sir John built the great Elizabethan range at the N side.

In the Civil War the Castle was held at first for the king, but changed hands three times. A ravelin was constructed in the bailey, and the S wall of the inner ward was breached. In the period following the war the Castle survived well. George Carew, a descendant of the original family, was in possession by 1686, and his descendants, now the Trollope-Bellews, have been owners since. It is now in the care of the Pembrokeshire Coast National Park.

The periods of construction have been defined in the study of the castle by Cathcart King and Perks in 1962. The oldest surviving part is the Old Gatehouse Tower of c.1200. When the Castle was given Edwardian corner towers and curtain walls in the late C13 the Old Gatehouse Tower was incorporated in the E curtain. There were two main phases of domestic improvement, in the late C15 and in the late C16.
The Old Gatehouse Tower, c.1200: a structure in small courses of rubble masonry with a barrel-vaulted undercroft. Its gateway arch at front is blocked and reduced to a loophole. At its S side a latrine turret was soon added serving the upper floors. There are two original storeys over the entrance. In the later domestic improvements it was heightened and an oriel window inserted.
The Edwardian castle of Sir Nicholas de Carew, c.1270-80: this includes the main curtain of the Castle, except where removed by later work, and the low wall defining the present outer ward. The main curtain incorporated the Old Gatehouse Tower. The new masonry is in larger stones, with tall thin loopholes of fighting type. The wall of the outer ward was earth-cored and is now very much decayed, but its crenellated masonry parapet survives. The main features of this period are the rooms of the E range: the domestic quarters above the Great Undercroft, the Chapel Tower, and the SE Tower. The Great Undercroft is a fine vault of 6 m span, raised on transverse ribs which have since fallen without leading to its collapse. The vault is segmental with a rise of a little over 1 m. In the Chapel Tower there is a vaulted roof of three structural bays with diagonal and transverse ribs, these ribs also having fallen. The SE Tower has a plain barrel vault of segmental form and a span of about 3.5 m. In the chapel there is a piscina. There is a small adjacent room with latrines.
The West Range, before 1320; including the Great Hall and the NW and SW Towers. This period may include the refashioning of the Gatehouse at the E side of the inner ward. The Hall and Towers are massive structures in coursed hammer-dressed masonry. Beneath the Hall are remnants of a double vault running its full length. The outer wall of the Hall is about 2 m thick at low level. Three great windows and a stair in the W wall which led to the lost minstrels' gallery. Probably three similar windows in the E wall, one of which was lost when the Great Oriel was formed at a later period overlooking the inner ward.
The towers of the W range are very similar, each circular but standing on great spurs on a square foundation. They are integral with the Hall, as they provide the communication between floors. The basement rooms are square, but the upper rooms approach a circular form. At the top of each is a crenellated parapet on corbels.

Improvements under Sir Rhys ap Thomas, c.1480-1507: Sir Rhys's work includes the gate of the outer ward, the N and S turrets over earlier construction on the E side, the second floor over the Hall adjacent to the Chapel, and architectural embellishments throughout the castle. (A range of buildings added by Sir Rhys outside the N curtain wall was later destroyed.)

The Grand Stairway block at the rear of the E range has a finely detailed four-centred arch with plain jambs. This block and adjacent refacing work is in large courses of hammer-dressed local stone, with door and window dressings in an oolitic limestone, apparently from Somerset. Windows with Tudor-arched lights arranged in pairs or in threes, within rectangular heads with label moulds.

In the Great Hall on the W side of the inner ward the main embellishment was the improvement of the windows. A large Perpendicular S window was inserted, and an oriel at the N end of the Hall, above which is a carved panel with three armorial displays. There was a low-pitched roof, the line of which can be traced.

The Elizabethan N Range, 1588-92: This range was added by Sir John Perrot, outside the line of the N curtain wall. It has two oriels and a rounded E end. It has generally been considered not to have been completed, though even in the C19 it was remarked that its windows had been at least partly glazed, and it must therefore have been roofed. It consists of hammer-dressed local stone in courses smaller than those of the earlier work, with string courses. There are crenellations of merely decorative type at the head of the walls. The dominant features are the great windows, constructed in oolitic limestone and divided by three mullions and two transoms, facing N, E, and to the Ward. The fireplace survives in the Long Gallery.

In the Civil War there were minor defensive modifications, mainly the blocking of some windows and the formation of a ravelin E of the outer ward. In the bailey E of the Castle there is also a large walled garden of uncertain age, the walls of which appear to incorporate numerous fragments of earlier buildings.

Listed grade I as a monument of national importance, a fine specimen of Edwardian military planning and Tudor domestic architecture, associated in its heyday with some of the most powerful figures in Welsh history.