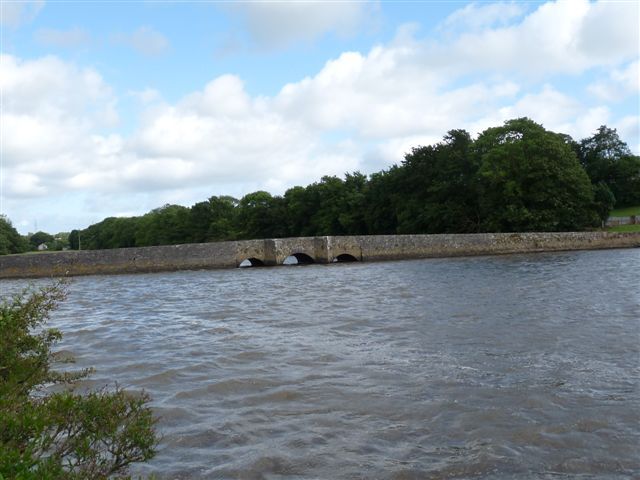 Location: About 500 m E of Carew Castle carrying the Carew to Cresselly road across the estuary of the Carew River.

There has probably been a bridge in this location (on an ancient river-crossing) from the commencement of the Castle. The obstruction to the river caused by the tidal mill barrier probably led to the construction of a bridge similar to the present one. The triple-arches at the centre of the bridge are perhaps C18: there was a bond to keep the bridge in repair in 1730. The bridge in its present general form is a peripheral feature in C19 views of the Castle, except that the causeways were lower than now with a pronounced rise to the hump-backed triple-arched middle section. This hump is clearly the reason why the outer arches are lower than the central one. There was also a contract for repairs in 1810-11. At some time the causeways were raised. Part of the N causeway was rebuilt by J Hicks and Sons in 1938. Recent repairs include the concrete grouting of the interior.

Three arches with a long causeway approach at each end. The causeways are constructed with a battered face to the downstream side (W) and to part of the upstream side. The carriageway is about 4.5 m wide between parapets. The parapets widen out at each end and the W parapet is continued for about 50m along the N bank of the downstream pond.

The bridge arches occupy the centre section and are separated by two cutwaters which also provide pedestrian refuges. The arches are each of about 3 m span and of segmental shape with deep thin voussoirs. The centre arch rises about 0.3 m higher than the outer arches. The bridge structure is in coursed limestone rubble the cutwaters and voussoirs hammer-dressed and the parapet in random rubble with large flat copings.

Listed II* as a fine early bridge which forms a valuable feature of the landscape and has group value with the Castle and the French Tidal Mill.