A Grade I Listed Building in Castlemartin, Pembrokeshire 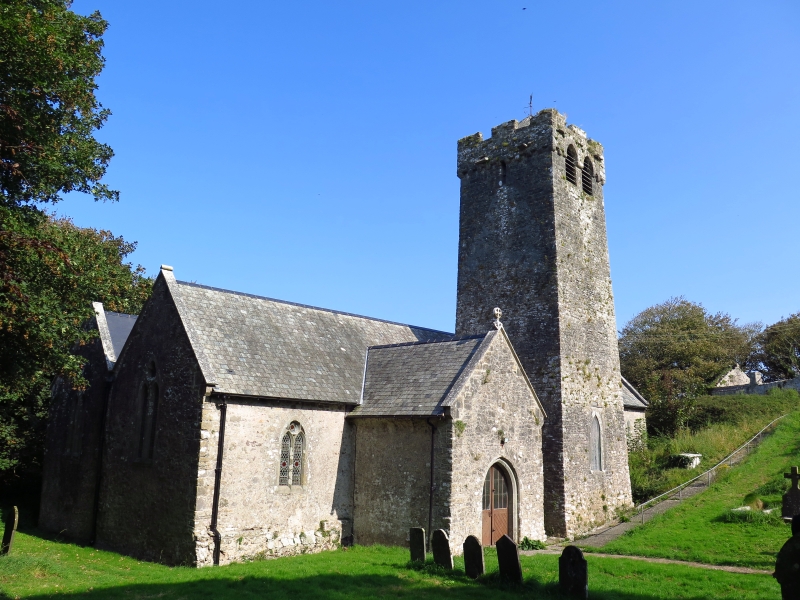 Location: In a lane NW of Castlemartin village.

Plan: C13 church and tower, the latter heightened in the late mediaeval period, standing in a partly artificial hollow. The tower is at the S of the nave, in place of a transept. there is a marked upward floor-slope in both nave and chancel accentuated by steps at the chancel arch and within the chancel. The axis of the chancel is also inclined to the right. The church was restored in the early C19 and again in 1858.
Exterior: Church and tower of random rubble masonry, part rendered. Slated roof with modern verge parapets. The tower was originally steeply roofed with gables to W and E, the verge lines of which are plainly visible as a join in the masonry. It was later altered to the local type by being heightened and given a corbelled parapet. Contemporary with this alteration are louvred lancets partly within the parapet.
The porch was originally of two storeys, but only supporting corbels remain of the upper floor. Water stoup beside the entrance door. Marks of a lost W porch and lost N and S chapels appear externally and internally.
Restored stone churchyard cross on modern stepped platform.
Interior: A continuous two-order arcade with pointed arches consisting of four bays on piers in the nave and two smaller bays on columns in the chancel survives at the N side. At the S side of the chancel is an arcade of two bays. The corbels of the outer orders of the arcades in the chancel carry carved faces in high relief, partly damaged: the best examples are behind the N pier of the present chancel arch. They have a death-like appearance, with closed eyes and shrunken noses and lips.
The N aisle is linked to the chancel by a large squint with its own lean-to roof.
The tower is vaulted at all floors. Its stairs are in the wall thickness (instead of in the more usual corner stairs-turret). The original entrance to the stairs from the nave is blocked.
C19 lancet windows have been inserted throughout including three trefoil-headed lancets at E.
The font is Norman, square, of the cushion type with a row of scallops around the top and small leaves and scrolls at the corners. It has a short thick shaft on a wide moulding on a square base.
A mediaeval church of considerable importance, with a collegiate plan form, differing in some respects from the usual parish church of South Pembrokeshire.
References: Lewis, Dictionary (1842)
Arch Cambr II iii (1852) 179-180; V iii (1886) 62-64
RCAHM Inventory (1925) 64
Dyfed Arch. Trust PRN 562