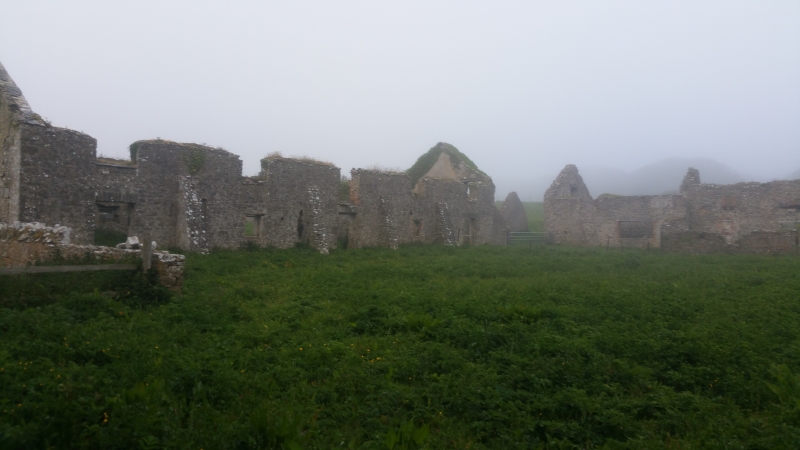 History: Brownslade farm was the home farm of the Mirehouse tenancy on the Campbell (Cawdor) estate. It has been unoccupied since at least 1938, apart from temporary use as part of the Army Range HQ. Much has been lost since the buildings were described for the RCHAM in 1975. [The mansion to which it belonged, Brownslade House (SR 9103 9752), was demolished in c.1980.]

On the W or entrance side is the original cobbled gateway. There were cart sheds on either side, the blocked openings of which are visible, with lintels. These sheds were later (after 1838) converted to a pair of two-storey cottages with a taller granary and a pigeon loft over the gates. The cottages have central doorways between windows. Their upper floors may have been part of the granary. N and S of these are byres or cattle sheds.

On the N side of the yard is a barn with large buttresses to its S wall. Three doorways facing S have flat voussoir heads. The upper storey also has a central doorway, and was perhaps a granary. This may be the earliest building of the group.

On the S side are cowsheds and byres, with what was probably a granary above.

On the E side is a three-bay threshing barn with an additional storage building to the N. The threshing floor W doorway has a deep segmental brick arch, the smaller E doorway has stone voussoirs. The central bay is flagged. Tall air-vents to the barn heads. A later W lean-to building, perhaps for machinery, blocks access to the main door of the barn.

The group surrounding the W yard are listed, despite the loss of Brownslade House itself, as an attractive group of model farm buildings laid out with a sense of architectural composition. THEY ARE the historic nucleus of the home farm AND IDENTIFIABLE WITH JOHN MIREHOUSE, THE AGRICULTURAL IMPROVER.