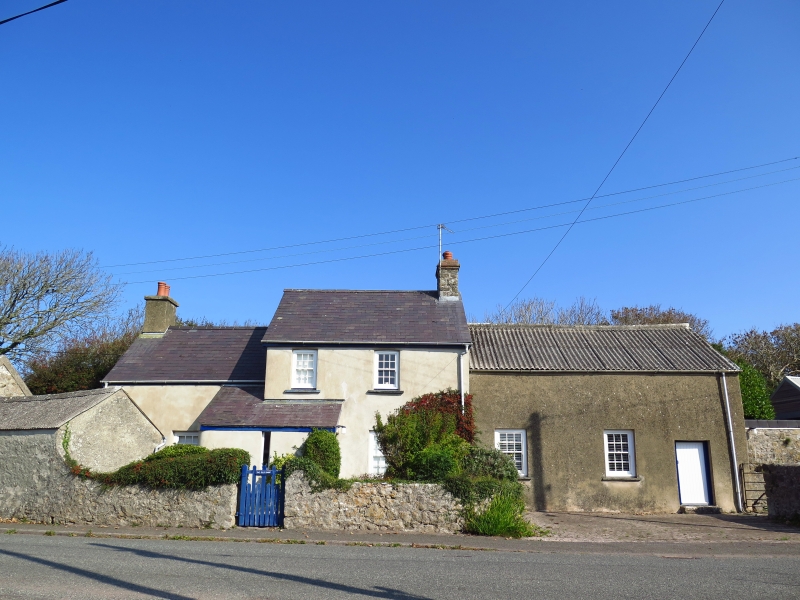 Location: At the N side of village street, second house W from Old Pound

Two-storey, two-window early C18 house (c.1740) facing S. Outshut and stairs at rear. The house windows at the front are six-pane sashes in exposed frames, repaired. The upper window at right probably has its original sashes. Slate roof coverings. Extensions to the house: A byre with loft and a disroofed pigsty attached at E, a room with a large end-chimney and a loft attached at W. Both of these have a lower roof line and are slightly set back from the front of the house. Later lean-to porch at front, with door at each side and a very narrow window to front. Access from the porch to the house is now via the additional W room. The buildings all in local rubble masonry, mostly rendered. Slate roofs similar to house, except byre.
The byre has a good cobbled floor. It has been partitioned and about one-third is entered from the house, with separate loft stairs in each part. [Asbestos sheeting roof.]
In the additional room at W the end-fireplace was arched over and there was a bread oven at its right, but later alterations have left only traces of these features.
Detached from the group at the W are two outbuildings, backing onto the roadside. These consist of an open-fronted shed and an enclosed shed in tandem, communicating via a door with ventilation slits. Rendered rubble masonry. [Corrugated steel roof covering.] Cobbled floors. There is a large hook attached to the roof of the enclosed shed and a disused boiler in the corner, now lacking its flue. Barred and shuttered window at W. This was evidently an old wash-house extended and turned into a small abattoir, with a roof-hook to hang a carcass for flaying.
Low garden wall at front, from the abattoir to the house.

An interesting example of a complete set of village butcher's premises based on an C18 cottage, now forming a picturesque group.