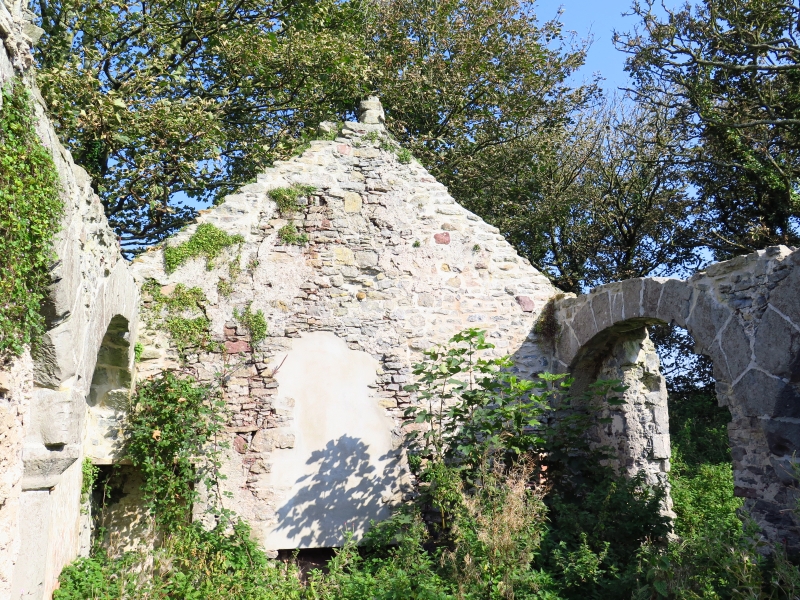 Location: Within St Michael's churchyard, about 40 m E of the church.

Ruin of a small building, based on fragments of a mediaeval structure. The original structure was incorporated into a two-room cottage which was later enlarged to three rooms. It was recorded as a cottage and dame-school for 21 children in 1847 and as a cottage in 1868, and it continued in occupation until about 1900. It stands close to the edge of the high ground to the E of St Michael's Church.

Local rubble masonry with traces of slate roofing. The N gable wall is 0.9 m thick and contains a chimney flue of oval shape in the wall thickness. An original entrance to the two-unit cottage with a heavy curved lintel is towards the S of the W wall, but now blocked. A lateral chimney survives at W serving a small corner fireplace. The third room added at the S end contains a large chimney with a square shaft, dripstone and capping.

The building incorporates parts of two arcades of C12 type, aligned N-S and standing about 5 m apart. The W arcade consists of one complete arch and a small portion of another, meeting on the outside face of a thick square abacus. This abacus stands on a slender column with a circular base and cap. The E arcade consists of two complete arches meeting on a very worn corbel. In 1852 these arcades were described as "on one side against the wall, on the other standing free". Both arcades blocked with walling. Carved faces on the abacus of the W side arcade, quite unlike the carved faces in the N and S arcades of the Church. The carved faces in the Old Vicarage are evidently an afterthought to the squaring of the abacus. They are inset within curved margins and shallowly detailed. There are faces on the two free corners, but there is also one in what appears a later style (bearded) on the engaged NW corner of the abacus, distorted because of its position. The latter at least is evidently later than the formation of the arcade blocking walls. Above the abacus is a socket hole.

Listed at Grade II* for important surviving early mediaeval masonry with unsophisticated carvings, incorporated in a post-mediaeval cottage, and for its archaeologically important relationship with St Michael's Church.