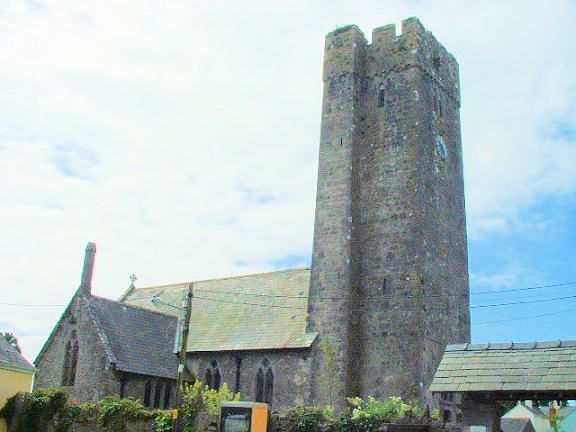 Location: At centre of Lamphey village. There are various spellings of the name Tyfie.

The parish of Lamphey was also a manor of the Bishopric of St David's. The church has repositioned fragments of C13 architectural detail in the chancel - a piscina and two lancet windows, and there is early masonry surviving at the bases of walls, particularly the N transept. At the W end is a C14/C15 tower. In the C19 the church underwent extensive restoration to the point of rebuilding, to counteract the effects of earlier extensive improvements. Its plan, however, is unchanged.

In 1811 the use of the little S chapel or transept as the private pew of Portclew House, with its own fireplace, is mentioned, and it was still a pew in 1845. Also mentioned in 1845 was the fact that all the nave windows had been converted to sashes, a modern ceiling inserted, and the N door blocked. These latter improvements may date from 1826, when the church was thoroughly repaired and re-pewed to achieve 200 additional sittings. In 1845 four Early English trefoil-headed lancet windows still survived in the chancel, but in 1852 only two were noted. The church was thoroughly restored in 1869-71 by Ewan Christian, architect of London.

The churchyard cross was removed in c.1830 to a neighbouring farm.

Nave and chancel under one uninterrupted roof, with porch and small transept at S and a larger transept at N. Local masonry in irregular courses. Roofs of large slates with crested tile ridges and stone gable-parapets. Cross finial at E. All rainwater heads carry the date 1870. Signs of a blocked doorway are visible at low level in the N wall of the nave.

There is a tall tower of three storeys at W, slightly battered, with crenellated parapet on corbels. At its NE corner is a stairs turret, projecting on the N side only. The tower masonry is randomly coursed with large stones at the quoins. Double belfry lights to E and W, single belfry lights to N and S.

The chancel is 5.5 m long by 6.5 m wide, with two lancets (re-set in the C19 masonry). The nave is 11 m by the same width, with transepts overlapping the chancel: the N transept opens to the nave by an unusual arch which is an incomplete segment, and also connects with the chancel by a small squint. The S transept or chapel is now the vestry. The tower, at the W end, is vaulted.

Memorials include a Gothick one to Charles Mathias (d.1831).

An exceptional Norman font of cushion type, three lobes and a band of six-pointed stars carved on each face. It has a short round column with a cable-moulding at top and bottom. Square base on modern octagonal step. There are traces of whitewash.

The churchyard wall is built up to the corners of adjacent buildings (school and bakery). Rubble stonework with a coping of spaced upright stones in mortar. At the NW corner there is a modern lychgate in memory of Anthony Mathias: two stone piers with a simple moulding and an oak roof, on which are slates taken from Lamphey Court.

Listed for its origins as a mediaeval church and for fine tower.