A Grade I Listed Building in Amroth, Pembrokeshire 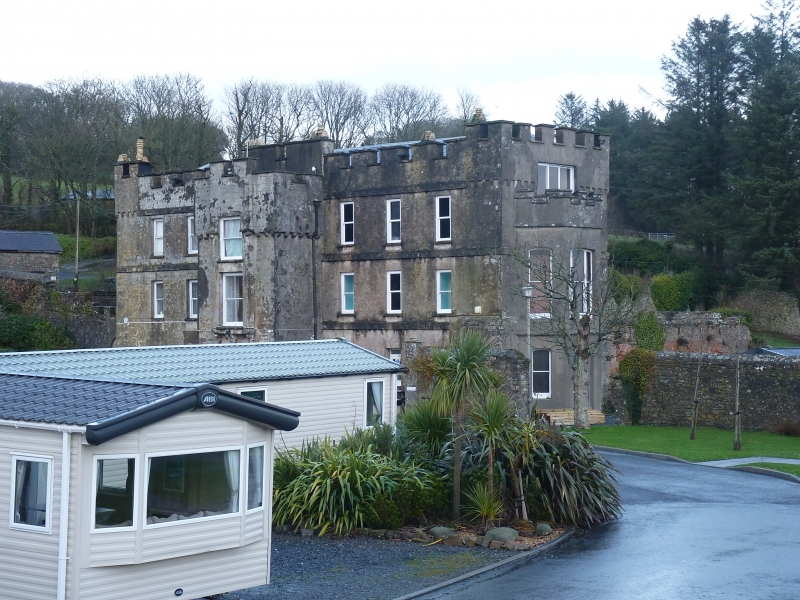 Location: At the N side of the unclassified coast road about ½ km E of the village of Amroth. A high wall screens the castle grounds from the road, with an entrance archway at the SW corner. A tree-lined drive

The Amroth Castle estate has alternatively been known by the traditional name Eareweare. There was a feudal residence here from the early Middle Ages, mentioned by Fenton. In 1670 John Elliott esq. of Eareweare paid tax on five hearths.

The house underwent an extensive rebuild in the early C18 to take its present form. It has windows of early Georgian proportions, plat-bands at the first and second floor levels and roof level, and a massive-looking main staircase of newel type with wide turned balusters and close-strings.

A front porch with main entrance stonework of probably C15 date survives from the early house, plus a vaulted room in the interior. The key to the development of the house is a sketch drawn in 1770 in J Pridden's MS tour of Wales (labelled Carmarthenshire / Laugharne, but patently Amroth). It apparently shows the top two storeys of the house of Miss Owen apparently seen over a hedge, with the crenellated parapet (which still remains) and the top of the two-storey S-facing bay window (which also remains, or has been reconstructed on the same lines). In the porch, the top storey is lit by a Diocletian window, where there is now a C19 sash window. Most interestingly, the first floor has a large pointed opening, perhaps a first floor entrance (as at Picton Castle, Upton Castle or Carew Fortified Rectory). At Carew the stonework of a first floor entrance appears to have been repositioned at ground level, and the same may have happened here. If this is so, the present ground storey with its one surviving vaulted room is the successor of an undercroft.

Colonel Ackland acquired Amroth in 1790 and was there at the time of Fenton's visit in 1810. Fenton details the improvements under Ackland: he preserved the old porch, made additions, converted an old vaulted ale-cellar into a dining room, and turned the mansion into a house of 'luxury and convenience'. The Colonel also entertained Nelson and Lady Hamilton, and added a plaque to the dining room ceiling commemorating the occasion.
Owners in the C19 included the families of Biddulph and Bevan. From about 1851 the house was briefly used as an asylum, under Dr Norton; this may be the time the chapel was added. Bathrooms were added at the rear. In the time of the Fussell family, in 1861, the house is described as having its principal living rooms facing the sea, including a very large dining room and a bay window of two storeys, as now. Lord Kylsant acquired the house in 1898, but does not appear to have made changes. In 1930 it became a farmhouse, was requisitioned and maltreated during the World War II, and in 1969 was acquired by the present owner for dividing into holiday accommodation.

To the E and S are walled gardens and orchards and to the N are farm buildings . The grounds are now used as a caravan park.
The house is of an L shaped plan with the main front to the W. A rear wing extends from the N half of the rear elevation, and the angle between main range and rear wing has been filled with secondary extensions.
The main W front is of three storeys with a full-height porch projecting in the centre. Range of seven windows including the porch. Rendered with scored lines imitating courses and voussoirs. Plat-bands at first and second floor levels and at the base of the parapet. Crenellated parapet hiding the slate roof. The porch is also crenellated. The archway is a Tudor arch of two chamfers in a light-coloured sandstone with one outband each side. The two upper storeys of the porch are probably C19, but there are three projecting corbels at first floor level possibly for an earlier oriel or first-floor entrance. The fenestration of the main elevation generally consists of hornless sash windows of 2:1 proportion in exposed frames, some still with 12 panes of handmade glass.
Access to the N side is via an archway in a yard wall, above which is a bracket with an angel supporter which formerly carried the owner's arms. This is a plain elevation generally, crenellated, with one part advanced and with replaced sash windows. The E (rear) is crenellated and much-repaired. Sash windows, except the servants' stairs window in Gothick style. The S end is a narrow elevation with crenellated parapet and a two-storey bay-window, itself also crenellated.

The Chapel is attached to the N side above service quarters. It is reached via an external flight of steps and has an anteroom at its N side. Nothing remains of its interior, except a damaged stained glass lancet E window. The W window is in decorated style. There are Tudor-style hoodmoulds to the windows of the anteroom and to those of the service rooms of the basement.

The entrance leads to a corridor through the house, with a vaulted room at the right. The main staircase to the first floor is of three flights around a stairwell, with large close-strings and large square newels, all painted white. There is a Gothick fireplace in the reception room to the left of the entrance (now a bar) and a Trafalgar commemorative plaque in the dining room ceiling.

Listed as a house of medieval origins with a storeyed porch which is also of special interest for its C18 development, as a country house in castellated style.