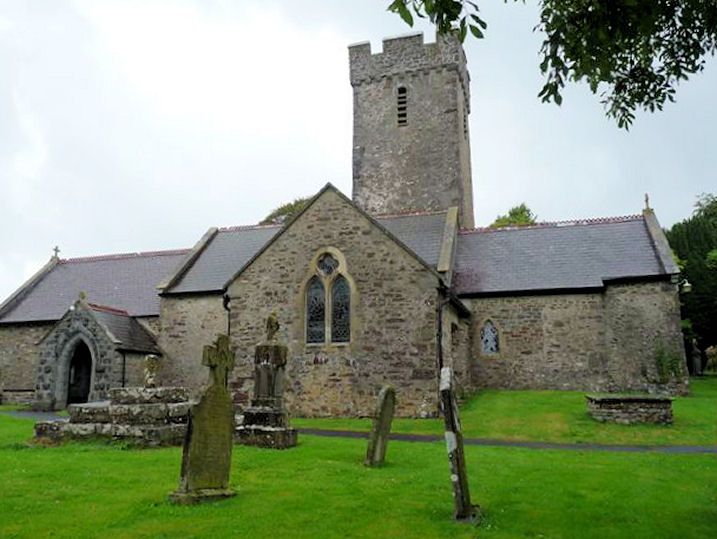 Location: 1 km N of Amroth Village, in an isolated group with Amroth Farm and the old village school. The group is called 'Castle Back'. The church is in a roundish graveyard surrounded by walls and hedges.

A church of perhaps the C13. A charter of 1231 indicates that the church had been granted to the Knights Hospitallers of Slebech; Green and Barker refer to a grant of c.1150. The list of Vicars commences in 1332. The N chapel was the private chapel of Amroth Castle.

A proposal in 1844 to restore the church during the incumbency of the Rev. W Harries came to nothing, and so it was in its unrestored condition when visited by Glynne in 1845. Glynne noted the external walls were partly whitewashed, that all the windows except the E windows of the chancel and the private chapel were 'wretched modern insertions'. He pronounced the church to be 'damp and vilely pewed'. He also described the Galilee porch at the W end, which was under a lower roof than the nave, and through a plain arch in which the Church was entered.

The Rev. W D Phillips was inducted in 1851 and took up the question of restoration, having just completed similar work at Crunwere; but he was unable to get any support from the landed proprietors who took 'too little interest in the condition of their tenantry'. He complained the pews were large and ill-arranged and that the only free seats were in an insecure gallery. From 1852 £482 was spent under the direction of the architect R K Penson of Oswestry, towards which the Bishop contributed £30 and the ICBS £50. The church was not enlarged, but in 1855 it was decided further enlargement was required towards which the ICBS granted £10. The Galilee porch was extended to provide additional nave seating. The words 'rebuilt 1855' are carved on the bellframe and the Church was re-opened on the 12th July. In the restoration the tower, walls (apart from the W of the Galilee) and vaulted roofs were retained. The porch appears to have been added later, and was in place by 1888.

In 1882 the Amroth Castle Chapel was granted to the Church. Its window had not been included in the restoration but has since been rebuilt in Perpendicular style. This was probably in the further restoration of 1899 under the Rev. J E Jones, when £700 was spent on improvements including a new vestry. In 1930 Mrs Crosland of Colby Lodge paid for the bells to be re-cast. In 1979 the benefice was united with St. Issells.

The main entrance gate is in a rubble masonry wall at the N. Iron Gate between stone piers, with a style and a mounting block. Near the porch is the base of a preaching cross, on which a C17 masonry fragment has been erected.

The medieval building comprised W galilee porch nave, chancel, N chapel and later vestry; N and S transepts, the N being the base of the tower; later W extension of the galilee and later S Porch and vestry. Rubble masonry generally, of local Carboniferous sandstone. There are traces of old white wash, especially on the N side. The masonry of the E and S sides, except the C19 extension, is irregularly coursed. On the N side, including the tower, the masonry is uncoursed with, on the W face of the tower, some rendering. The porch is in large rock-faced courses of limestone with chiselled margins. The vestry at the N of the Chapel is of local rubble masonry with limestone quoins. The roofs are of slate. Red ridge tiles with pierced crests. Coped gables.

The tower is of local type, unbuttressed and crenellated on a prominent corbel-table. Stairs turret at the NW with slit openings at each turn. The belfry has slate louvres to the E, W and S. There is a tall boarded opening to the N and beneath it a window to the ringing chamber with a large rough arch and a mediaeval window to the ground storey with two trefoil headed lights in a square opening.

All the windows except those of the tower are C19. The Chapel window is in Perpendicular style, the others in lancet style, some paired in plate tracery with a roundel.

A large blocked aperture in the E wall of the S transept has a nearly-flat arched head.

The tower base, the S transept and the E part of the nave are steeply vaulted in the local manner without impost line. The chancel arch is low and narrow and has a double chamfer with an undercut stop. Two steps at the arch and one more at the sanctuary. Chancel and Chapel paved in black and white chequer tiles. A wide pointed arch leads from the Chancel into the Amroth Castle Chapel. This has a boarded barrel ceiling with ribs.

The nave is long and narrow with an arch to the W of the vaulted part. In the part replacing the Galilee porch the roof is constructed with arch-braced collar beams with the top compartment of the trusses of trefoil form. The pews are of the 1855 restoration. The pulpit is of oak on a stone pillar, and stands against the N pier of the Chancel arch. The late Norman font stands against the S wall of the nave and is square and covered in sculptured foliage. It has a good modern carved cover in late Gothic style.

The wall monuments include a set in the Chancel commemorating Rebecca Poyer and her three husbands. One monument dated 1725 is framed with square pilasters; one of 1743 has an egg-and-dart frame, Corinthian columns, marble shafts and base and a cherub in the pediment; Rebecca's monument, dated 1764, is framed with ramped volutes and a broken pediment on flat pilasters.

Listed as a largely medieval vaulted church of unusual plan preserved in an unassertive C19 restoration.