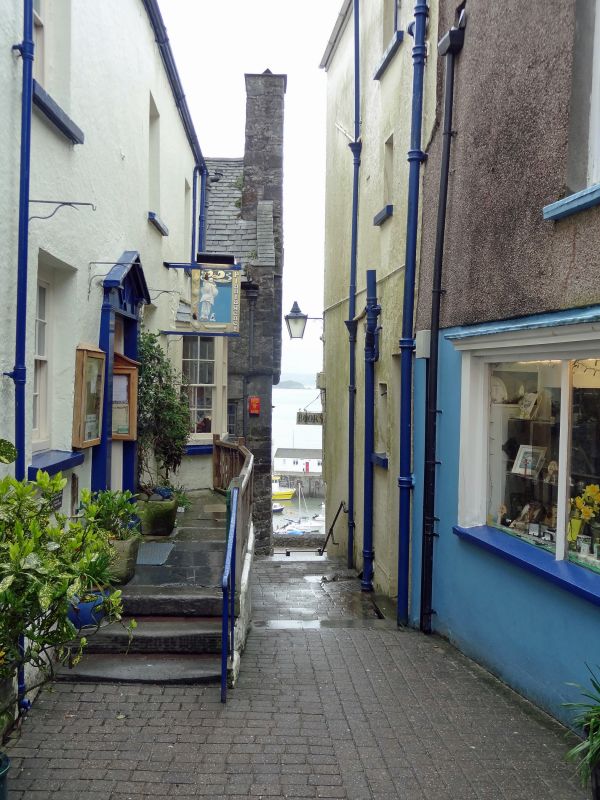 Location: Situated on the W side of Quay Hill between Tudor Square and Bridge Street.

House now restaurant, externally late C18 to early C19 but with considerable medieval fabric surviving. There is a connecting door at first floor from the Tudor Merchant's House, of which this may have been part. Shown as Griffiths Temperance Hotel in photographs of c1900.

Ground floor has rubble stone exposed end walls with cambered-headed fireplaces, the S end one about 1.7 m wide, the N end one small in projecting piece of wall. Rough corbels each side of projection carry 2 axial beams to a cross-beam just S of bay-window, on shaped corbels. Another rough corbel on rear W wall just right of cross beam. 3 axial beams to middle bay, another cross beam and 2 to S bay.
Arch through to rear wing in centre, rubble stone right hand, red brick voussoirs to right only, rebate to right jamb. The rear of this wall, facing into wing, was external with stone voussoirs and rough keystone to arch. Tall blocked opening above with timber lintel and stone sill. Brick jamb to left, right jamb in angle. Blocked window to left with timber lintel. N wall has 2 rough windows with reveals splayed inwards and timber lintels. One square opening above and tiny square opening above again. W end wall has fine fireplace with stone voussoirs to cambered arch and squared stone jambs, the chimneybreast up to about 3.5m, then battered back. Corbel in angle each side of fireplace. S wall was external, it has continuous corbelling and small square first floor blocked window with timber lintel, C20 stair to first floor door in angle with massive oak lintel.
Ground floor right room has 2 C20 beams on plastered corbels and small end fireplace. Small canted oriel on N side overlooks rear of Tudor Merchant's House.
Basement has massive oak beam on corbels to left of doorway, another, smaller, further left and corbels for a third beyond, over inserted stairs. N end wall has blocked door with timber lintel to Tudor Merchant's House to left, shallow niche to centre. Door through to back room was external, tooled stone jambs, rebated on inside. Big beam across just inside rear room. Corbels for jettied upper floor. Present ceiling beams on inserted corbels. N wall has corbels for 3 beams and 12-pane window to rear yard of Tudor Merchant's House. Door low in rear W wall to right, brick fireplace to left.

Graded II* as one of the oldest buildings in Tenby with substantial medieval remains.