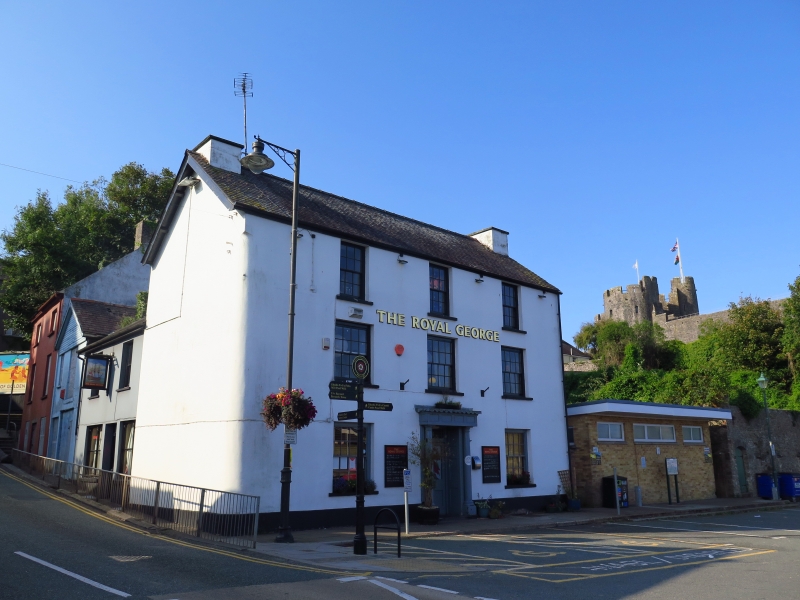 Location: On the W side of Northgate Street facing the Town Quay and Mill Bridge.

Late C18 inn, shown in Paul Sandby engraving of 1778, in J. Laporte engraving 1804, and in watercolour by J. C. Buckler 1815. The inn stood against the right tower of the medieval North Gate, and the slightly chamfered NW corner shows the point of joining. The 1778 engraving shows the building obscured by part of the town wall, but in front of the wall a large stepped mounting block on which was the inn sign. The 1815 watercolour shows the North Gate, and the inn with smaller upper windows, no centre upper window, and a simple doorcase without columns. A later illustration shows the front with the doorcase, but still with small upper windows, and the rear wing with Georgian bowed shopwindow (as on No 29 Main St.).
There was another house of similar scale attached to W, demolished in C20 for public toilet.
The inn is presumably named for the Royal George, which sank with great loss of life in 1782. It is recorded as being kept by G. Hurlow, shipowner and merchant, c. 1797 and in the 1820s to 1840s by William Bowen, father and son, who kept the Mill on the bridge. Another miller, Thomas Jones kept it from 1844 to the 1860s, and the inn then closed and may have been the Jones family house. Reopened 1874 by G. Hurlow Scale of Eastington, grandson of G. Hurlow. Run by the Gedge family 1878-1905, then sold. Altered after 1981 listing. It contains one of the six known 'Chinese Chippendale' style staircases in Pembroke.

Included for its special architectural interest as a prominent later C18 inn on the Town Quay.