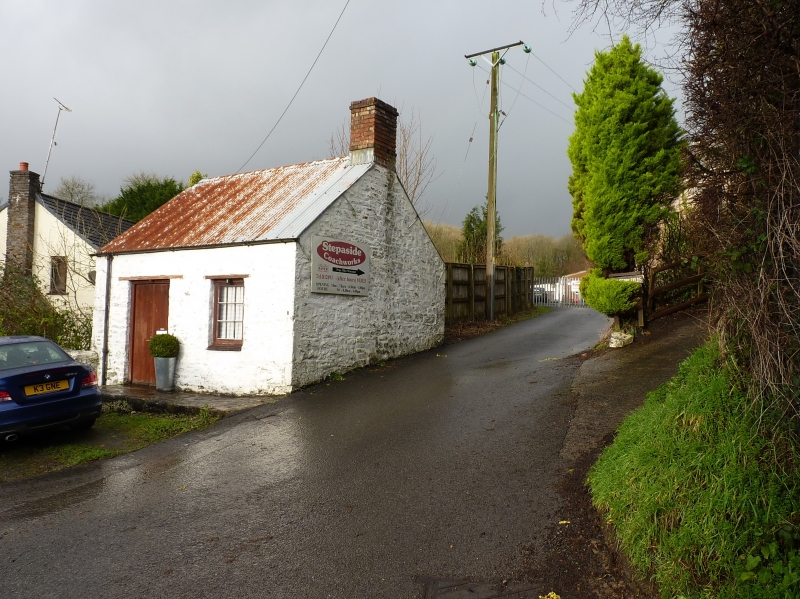 Location: On the N side of Kilgetty Lane in the hamlet of Stepaside, at the entrance to Stepaside Coachworks.

Kilgetty Colliery consisted of several pits, the first documented of which was sunk in 1775. These were abandoned and re-opened on numerous occasions. A beam engine was bought from the Neath Abbey Iron Company for the colliery in c.1811, and further pits were sunk in the 1840s. During the 1850s the colliery prospered, providing coal for the Kilgetty (or Stepaside) Ironworks, but it declined in the 1860s. It last opened from 1937 to 1939 under the Kilgetty Anthracite Colliery Company, when over 250 men were employed.

The weighbridge office probably dates from the redevelopments of c.1811 or c1840. It provided shelter for the miners' and the company's checkweighmen and their ledgers, and to house the reading equipment of the weighing machine, the platform of which would have been set into the road. It provided a gauge of coal for sale and the information for paying miners by weight. The importance of weighbridges was recognised in the Checkweighmen's Act of 1860 and the Coal Mines Regulation Act of 1887 which enforced the election and payment of weighers by the miners themselves. From 1908 checkweighmen were also responsible for overseeing underground working hours, and they had an important role in the development of trades unions.

The building is 5 m square, single storey, of only one room, with walls very slightly battered outwards, of rubble construction with dressed stone quoins. It is set on a platform two steps above the road at the front, being built into the rock at the E end and elevated where the ground falls away to the W. It is gabled, with a replacement corrugated-iron roof and a small brick chimney at the E end. It has one small nine-paned casement window and a plank door to the front, all the joinery replaced. A blocked doorway to the rear and a blocked window to the E. The W side has a wide fixed light window at a low level. The weighbridge platform position is no longer apparent and the pavings and falls in the vicinity have been much altered.

Listed for its historical importance as a rare surviving C19 colliery weighbridge office, and one of the few remaining buildings of the Pembrokeshire coal industry.