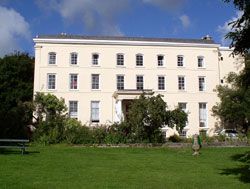 Location: Situated in wooded parkland and approached by a long drive from North Lodge, Clay Lane.

C17, C18 and 1810 great county house of the Owen family; said to have been built in 1656 and rebuilt in 1734. Described in 1802 as "neither ancient nor modern, being fronted with brick, and the frames of the windows and the cornerstones of freestone, somewhat in the style of Llanforda (near Oswestry) before it was burnt". Remodelled in 1810 for Sir John Owen the extent of the alterations uncertain but presumably including the present interiors and the exterior stucco. The Owen family came from Bodowen, Anglesey; in 1571 HugháOwen married the heiress of the Wyrriots of Orielton (a family recorded there from 1188) and died 1613. His grandson Sir Hugh Owen, 1st Baronet (d 1670), inherited and may have built the core of the present house. Sir Arthur, 3rd Baronet, may have rebuilt before his death in 1754. Sir Hugh, 6th Baronet, was a minor and died young in 1809. He left the estate, but not the title, to his cousin John Lord of Pembroke, later John Owen who was made baronet in 1813. He rebuilt the house immediately but by 1820 was heavily in debt, spent vastly on the election of 1831, sold the furniture from Orielton in 1842 and the rest of the estate 1856. In the later C19 the E front was shortened by five bays.