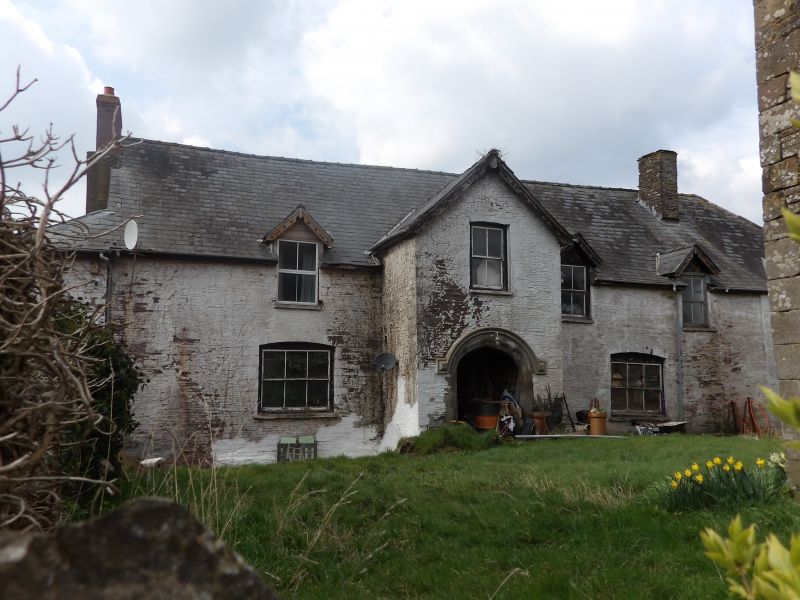 Location: Located below the scarp edge of the valley, facing S on the access of its medieval gatehouse.

The major medieval manor house of the area, built in the late C15, within a walled precinct, the seat of Sir William Vaughan, the first sheriff of the county, improved with an added porch in the early C16, and further extended in the C18. A surrounding park is shown on the 1607-37 Saxton/Kip map of Radnor Comitatus.

Rendered stone, with slate roof, hipped at E end. One storey and attic. The plan consists of a near-central cross passage within a former open 4-bay hall to right with a lateral stack, and beyond a closed partition a heated room to the left, perhaps a kitchen, with a great chamber above extending over the cross passage, and an inner closet in the narrow S bay. Opening from the S end ?kitchen, there was a late medieval rear (E) wing at right angles containing a granary, and a narrow building leading S off the corner of the heated room, of unknown purpose, but perhaps a stair tower. Both wings were demolished c1975. At the N end, an C18 pair of dairies, probably an adaptation of a single storey medieval structure.

Over the entrance to the cross passage, an early Tudor period 2-storey porch, with moulded outer 2-centred arch with hood mould dropping to square carved terminals. Windows of the C19, 6-pane sashes within segmental headed openings to ground floor, 4-pane sashes above within gabled raised dormers. At the S end, an added C19 farm kitchen with bay window, reglazed, on the S face. Windows replaced at rear, and where wing demolished. Porch has internal side seats. Walls rendered. E gable end has 2 windows to each floor.

Not accessible at the time of inspection (April 1995) however it is recorded as having important interiors. The 3 roof trusses of the hall are exceptionally fine, with chamfered scissor rafters to the principals, carrying halved pendant posts, formerly with a carved bosses. The spandrels are filled with pierced cusped boards. Three tiers of purlins with windbraces to the lower two tiers. The principal rafters are seated on to stub bearing plates which probably projected internally and finished with carved bosses, now removed for a later coved ceiling. The trusses over the great chamber are simpler, with arched braces collars, and a full close studded truss dividing off the inner closet. A four-centred doorhead to the narrow structure running S from the S end suggests this may have been a stair tower. The chamber above the porch has a panelled vault with moulded timber ribs. The dairies at the N end have a central cross beam and windows to the gable end. Evidence of wall paintings was recorded in 1962.

Listed at Grade II* for the importance of Great Porthamel and the surviving interiors of this farmhouse, described by Jones and Smith as 'one of the more remarkable medieval houses of Wales'.