A Grade I Listed Building in Glasbury, Powys 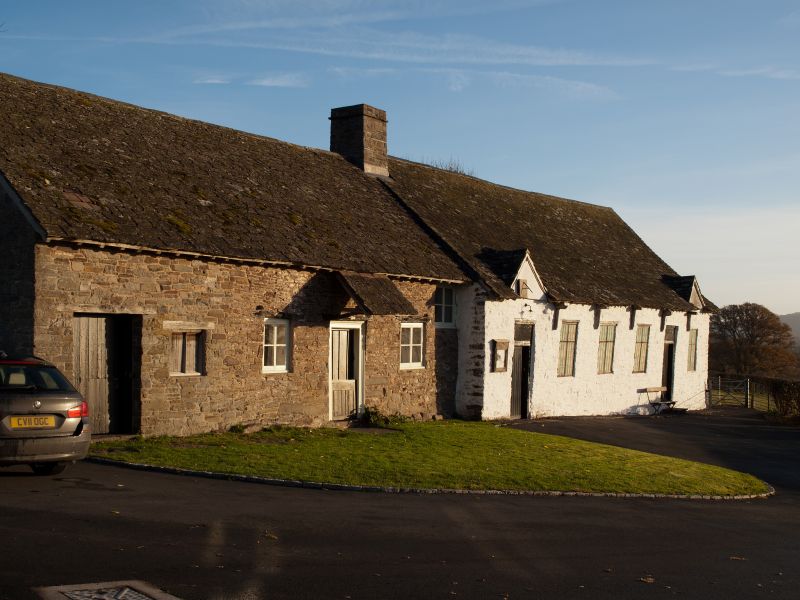 Location: The chapel and adjoining cottage lie at the end of a lane off the road from the A.438 Hereford to Brecon Road to Ffynnon Gynnydd, near the top of a steep bank and overlooking the Cilcenni Dingle.

Traditionally, the non-conformist meeting near Maesyronnen is said to originate with the start of Vavasour Powell's ministry in 1640. An Independent Chapel at Maesyronnen stemmed from the 1649 Act for the better propagation and preaching of the Gospel in Wales, which permitted the setting up of licensed non-conforming groups, and it was formed as an offshoot of the Baptists of Llanigon and Hay. Various ministers are recorded from before 1658, including Henry Maurice 1672-1682, an unlicensed preacher, who probably used, what was termed 'The Beudy', a sub-medieval longhouse-derived farmhouse at this remote place for unauthorised meetings, on the land of Charles Lewis Lloyd of Maesllwch. Oliver Cromwell is said to have attended a service here. The chapel was adapted for worship by dissenters and registered at Presteigne in 1696. The building is also associated with Abraham Parry, grandfather of Dr. Abraham Parry, F.R.S. editor of the first English Encyclopedia. The building, with the cottage, its garden and land, was leased for all time by the successors of Sir Humphrey Howarth to the chapel elders by indenture of April 1720. The Cottage is leased to the Landmark Trust.

Rubble stone with stone slate roof on the S, concrete tiles on the rear (N) slope. The chapel has a door at each end, both with a small rendered gable over, that at the W end bearing a sundial, renewed in C20, inscribed 'Redeem thy misspent time that's past', the doors of oak with cover strips. Between, three C20 oak cross windows with leaded glazing, and a further cross window beyond the lower door. Two windows in the E gable. The ends of the tie beams protrude through the wall and have long vertical keys.

The chapel comprises one large room, divided by slender C18 roof trusses into 6 bays. Walls are plastered and segmental plaster vaulted ceiling. Stone flagged floor. The tie beams are chamfered and are supported on central chamfered posts to the floor. Slender raking struts to rafters behind the ceiling. On the internal gable, an encapsulated cruck couple with traces smoke blackening of the medieval house, the tie beam removed, and stopped half-dovetail for a trenched collar, the collar now removed to a higher level. Jambs of a blocked opening pre-date the cottage stair. On the centre of the N side, a raised pulpit with panelled front. On either side a rectangular panelled boxed pew with angled bookrest, and similar boxed pew opposite, and a further late C17-early C18 elongated pew with ogee-edged planks in the SE corner.

A range of wall monuments of interest to the history of C19 non-conformity in the district. On S wall, (a) slate tablet to John Reid, †1832, and wife. On E wall, from S, (b) painted limestone, 1 top and 2 lower panels by William Bevan of Merthyr, to Elizabeth Bowen †1818; (c) Limestone tablet with inset ogee headed panel and cornice, to Revd Richard Lloyd of Glanyravon, Lambeder, †1840; (d) slate tablet by Morris of Hay, with side pilasters, cornice and urn within ogee top, to Mary Lloyd, †1840; (e) Catherine Powel Tuck of Noyadd, Llanstephan †1864; (f) fluted pilastered panel with fan top, to Ann Jones of Broynllys Cottage, †1826; (g) Painted slate tablet with low relief, gadrooned at base, fiery urns, to Thomas Gwenllian Jones of Trecastle, †1846; (h) painted stone with segmental top, by T.Hughes, to the 3 offspring of John and Joan Prosser, after 1844; (i) painted limestone tablet with shaped top containing low relief urn, the inscription divided vertically, to David Williams †1851; (j) Limestone tablet with horned top, to Ann Prosser †1869. On the W wall, (k) a gabled limestone tablet to Thomas Prosser, †1858.

Included at Grade I as the most important surviving building associated with the early non-conformist movement in Wales.