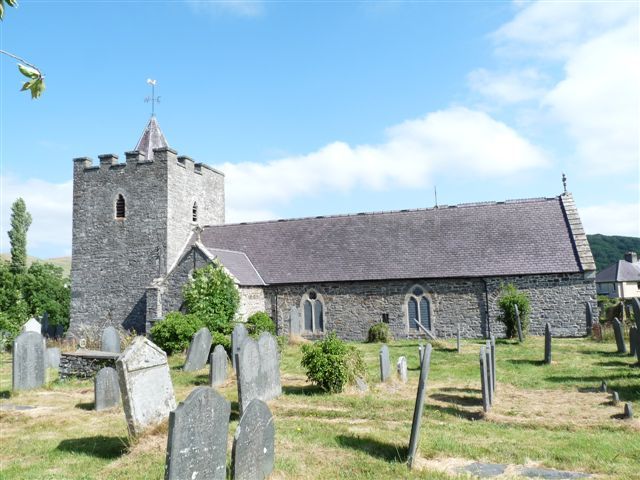 Location: Situated in large churchyard in the centre of the village.

Anglican parish church, probably C14 to C15. The roof is said to have been taken down, cleaned and re-erected in 1746 and was much renewed in the restoration of 1874-6 by R K Penson, which cost £1,383/2/9 1/2 d(£1,383.13), (estimate £600). Penson added the N vestry and bier house, replaced wooden windows with ashlar Gothic ones, and added all the fittings. He blocked the S chancel door and remade the 2 porch doorways and W door. He intended to panel the last 2 bays of the roof, but not done to save money. An engraving of the N side of the church published in 1856 shows a pointed door now blocked, 2 plain square windows and the remaining medieval lancet. There are 2 blocked S doors and one blocked N door, the present S porch and S door look all C19, but Penson's plans do not suggest that he made a new opening here, so the blocked nave S door must have been blocked long before.
The W tower has presumably been lowered as it lacks the usual corbelling under the battlements which are C19, but had been lowered before 1856. The tower was repaired in 1905 for £220.
According to Meyrick, in 1810 there was an ancient holy water stoup in the porch, and a beam over the door with 'JS WWA 1431 Churchwardens' carved on it, also 3 heads in the middle and 2 animals each end. There was also a W gallery inscribed and dated David Morgan Richard Jenkins Churchwardens 1683, formerly carved with 2 dragons, and a screen of elegant carved Gothic work, all removed. Meyrick also gives inscription, now lost, to John Morgan died 1757 aged 20 of a stone in the bladder weighing 3 1/2 ozs. The screen had gone by 1833.
The seven-sided font is rare, other examples in Britain are at Tregaron and Pendine.
The Celtic carved stone in the porch known as the Maesmynach stone came from the Gaer Maesmynach hill fort at Cribyn, and thence to Castle Hill.
The church dedication has also been to St Hilary. There was a schoolhouse in the churchyard.

Anglican parish church, rubble stone with slate roofs, nave and chancel in one, W tower, C19 S porch and N vestry. Tower is broad with battered base, W recessed pointed door with ashlar voussoirs, renewed in 1874, and 1874 2-light pointed window above with quatrefoil in head, and small single light above. NE stair projection with 2 small loop lights. Bell-openings are of 1874, single pointed cusped lights with louvres. Battlement without corbel course below, with C19 rock-faced stone coping. Recessed slate octagonal short spire with weathercock. Buttress at SE at joint with nave. Nave windows of 1874 are ashlar flush 2-light with trefoils in heads.
Nave and chancel have C19 iron cross on ridge to mark division and stone cross on E gable. N wall has window each side of blocked door with pointed arch of squared stone voussoirs. Two-light windows with trefoils in pointed heads. Straight joint to left of second window over vestry/bier house. Chancel N has lean-to vestry with N wall external chimney with battered base and set-offs and flanking lancet windows. Coped gables E and W, lean-to bier house on W with shouldered-headed doorway to N end. Chancel N has small eroded medieval lancet. E end has 1874 3-light with 3 foiled circles in head and stone voussoirs. S side has blocked pointed chancel door to right with squared stone voussoirs to head, 2 C19 2-light nave windows with trefoils in heads, another blocked pointed door with squared stone voussoirs partly obscured by porch which appears to be mostly of 1874 with coped gable, ashlar pointed entry, trefoil gable light, and pair of wooden gates with roundel pierced top rail. Open barrel-roof within and chamfered pointed S door with double board doors and iron hinges.
In porch is fine C9-10 Maesmynach Stone moved in 1958 from Castle Hill possibly part of a cross shaft with Celtic interlace pattern, also C19 ashlar font removed in 1988 from disused church of Llanfihangel Rhostie, at Rhosygarth.

Tower has medieval plastered vault and small N door to winding stone stair. Two bells, one of 1800, the other removed from the derelict church at Rhosygarth dated to c1350.
Nave and chancel have single roof of 11 close-set trusses with high collars and kingposts, the chamfered principals carried down and ended with small carved stops. Axial bracing from king-posts to ridge. Double purlins with windbracing in all 3 tiers, full lozenges in upper 2 tiers, half in lowest tier. The roof is substantially restored but several of the principals and some of the windbracing appear medieval. The 2 chancel trusses are C19, simpler without king-posts and there is no windbracing in last 2 bays, 2 medieval bosses affixed to chancel truss suggest a lost C15 barrel ceiling, which it was hoped to restore. Plastered walls, segmental C19 arch over S door. One step to chancel, another in line with pointed N door into vestry. Sanctuary with encaustic tile floor. Vestry has reset holy water stoup mentioned by Meyrick as being in the porch.
Fittings: Massive C13 or C14 conglomerate stone font with 7 panelled sides and deep splayed underside, on C19 pedestal. Fittings of 'Danzig oak' by R K Penson, made by Farrimond & Co of Chester, of simple well-designed Gothic carpentry including pews with pierced circle in bench ends, pulpit with tracery panels, chancel stalls and reading desk, altar rails with band of trefoils in roundels. Brass eagle lectern, c1880. Simple iron Gothic altar rail with 4 standards, by Penson. Reredos of 1895 by Jones & Willis with blind Gothic tracery to panels and texts each side.
Memorials: Slate plaque to Rev Moses Roberts 1735 with crude incised cherub head. Slate plaque to Rev John Morgan died 1762 and wife died 1763. Crocketted Gothic Bath stone memorial with 2 engraved metal plates to the Williams family of Castle Hill to 1862, including John Williams died 1806, J N Williams died 1832. Plaque to the Rev Peter Felix died 1861 signed by Dodson of Shrewsbury. Arts and Crafts style beaten copper plaque to L P Pugh of Abermad, died 1908.
Stained glass: E window Ascension with Angel at the tomb and Appearance to S Mary Magdalen, 1961; S window SS Ilar and David 1967 and chancel N small lancet, Pentecostal dove and chalice, 1967, all by Celtic Studios of Swansea.

Graded II* as a medieval church with one of the very few surviving medieval roofs in the county, coherently restored in 1874-6 with interior fittings.