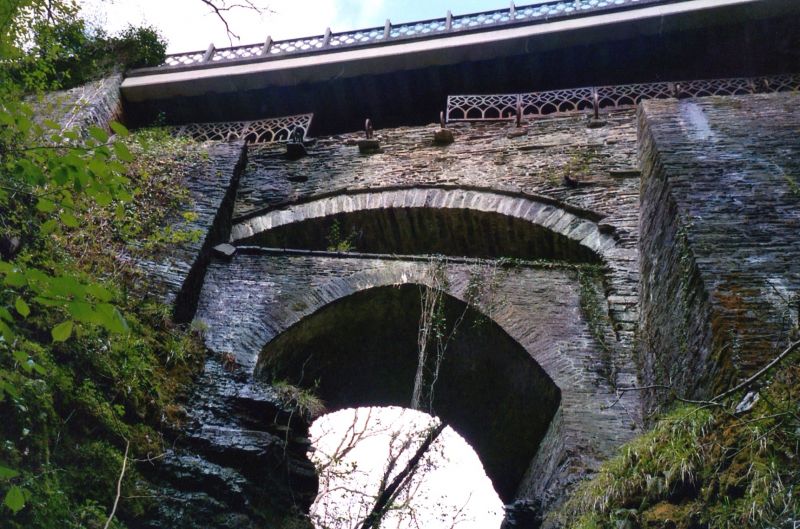 Location: Carrying the A4120 across the gorge of the Afon Mynach on the E side of Devil's Bridge.

Three bridges, one above the other over a narrow ravine of the Afon Mynach. The lowest and earliest is of uncertain date possibly medieval, possibly C16, repaired or rebuilt in mid C18. It has one obtusely pointed arch, about 100' (30m) above the level of the river. In 1753 the road level was raised and a stone segmental arch thrown immediately above, with a span of some 60' (18m). Finally in 1901 the level was again raised and a metal structure thrown across. This was replaced in late C20, concrete on steel beams, retaining 1901 railings.
The oldest bridge in 1777 was said by Wyndham to have been scarcely 20' (6m) in span and 'a few years since in a very ruinous state', suggesting that it had been repaired after the 1753 bridge was built. It is possible that it had been rebuilt wider to strengthen the abutments of the next bridge.
B. H. Malkin in 1804 noted the second bridge wider than the first. The bridge was improved by Thomas Johnes of Hafod in 1814 who took off a crumbling stone parapet and added cast-iron railings brought from Aberdare. The bridge was then described as 'quite a new object'. The Rev. T. Rees writing c. 1817 says that it was 'in contemplation to improve the upper bridge by raising and widening it'. Hughes in 1823 says that the second bridge had been 'lately improved and the sides secured by iron railings', but in 1824 the arch was said to be broken by traffic and it was being repaired in 1825 'after recent damage'. The railings survive and are said to be inscribed Aberdare Iron Works 1814. In 1895 the 'old bridge' presumably the original bridge, was described as cracked through middle by frost and part of the S side had fallen.
The 1901 bridge was added by Cards. County Council, rejecting a suggestion that the structure be made more attractive by 'embellishments'. It was designed by Roderick Lloyd the county surveyor, and made by Rees & Kirby of Morriston.

Three superimposed bridges, the lowest of rubble stone, narrow with obtusely pointed single arch, and stone voussoirs, probably refaced in C18. Flat coping. Arch is set under arch of second bridge of 1753, built closely above. This is of rubble stone with single segmental arch made of courses of large squared stones, the ends forming large stone voussoirs. Arch ring. Deep masonry above.
Parapet removed 1814 for cast-iron parapet with cast-iron scrolled supports from crude stone corbels. Supports end in pierced roundels. Parapet is made up of ten joined cast-iron panels each side (some missing on upstream side), each panel pierced with 4 pointed arches with 4 roundels over (matching those on supports), the roundels encircle a concave-sided lozenge. Massive raking abutments each side of stone arch rising from rock below and to each side of the original bridge.
Raking abutments altered and enlarged to carry the 1901 bridge just above. This now has flat concrete C20 roadway on steel corrugated decking carried on two steel deep I-beams, pierced for lightness. These replace 1901 iron or steel girders. Original 1901 railings are reset: simple lattice of flat iron strips. Stone piers each end. On rubble wall to SW plaque: 'Adeiladwyd gan Cyngor Siriol Ceredigion 1901. Gorchwylwr R. Lloyd'.

Graded II* as a remarkable succession of three superimposed bridges, one of the best known picturesque sites in Wales.