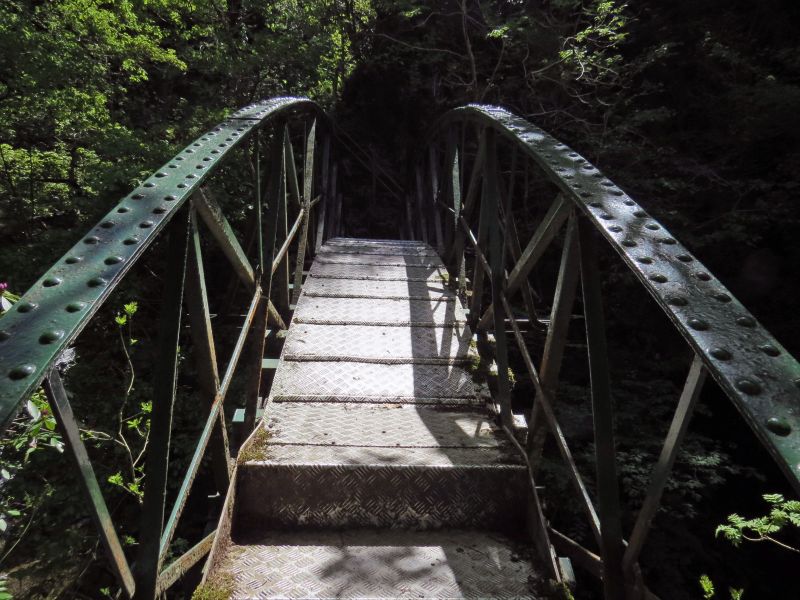 Location: Crossing the Afon Mynach on the bottom of the gorge some 200m N of the A4120 road bridge.

Arched metal bridge over the Afon Mynach, built 1867 by T. Stooke engineer, made by the 'Aberystwith Foundry', according to attached plaque. It is not certain which foundry is meant, and Stooke is otherwise unknown. The bridge is probably linked to the improvements to the hotel and the amenities carried out by the Hafod Hotel Company, formed in 1861 by Mr. Balcombe, promoter also of the Queens Hotel Aberystwyth and other projects, but Balcombe was bankrupt in about 1866.

Pedestrian bridge over the Mynach. High arched bridge made of riveted iron. Construction apparently of thin bows, two in parallel below carrying the (renewed) steps and decking and two forming the handrails, linked and braced by thin uprights with diagonally-crossed bars between, every second upright secured by a raking support projecting out from under the decking. A thin metal rod at mid-height links the crossings of the diagonals. Solid sheet metal panels at each end one with makers plaque 'Aberystwith Foundry 1867 Thos Stooke Engineer'.

Included as a C19 bowed footbridge of remarkable riveted iron construction, part of the development of the site for tourism in the 1860s.