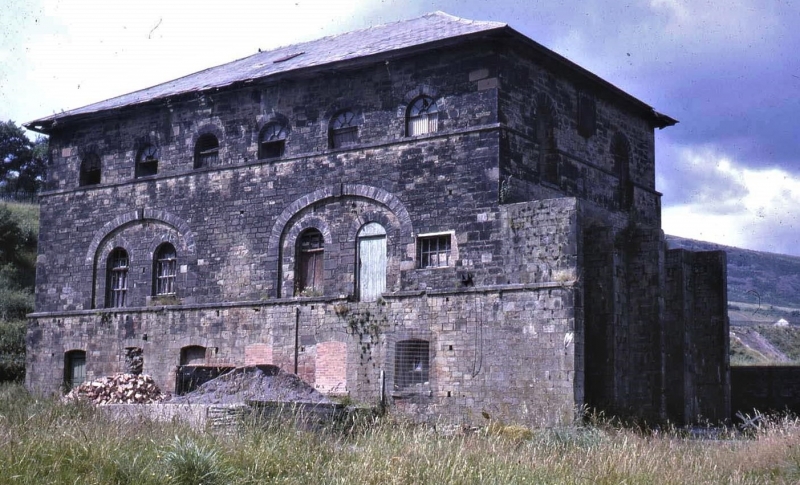 Location: The Sports Centre is at the end of Albert Terrace, leading off Neath Road.

Built as a blast engine house for the Llynfi Ironworks (Yr Waith Newydd) in c.1839-40 probably to house two Cornish double acting beam engines serving four blast furnaces which lay under the hill immediately to the N. A range of Lancashire boilers stood on the S side. The Company, which began in 1839, had in 1855, in addition to the blast furnaces, 54 puddling furnaces, 4 rolling mills, 26 coal levels, iron ore pits, 9 smithies and 107 coke furnaces, and employed 1500 men, women and children and 100 horses. Its operations were gradually supplanted after the introduction of the Bessemer Process (invented 1856) and eventually closed in 1889. The beam engine was removed in 1890 after which time the building was used to store grain for feed for the colliery ponies. After a period of decay the building was renovated by Ogwr Borough Council architect''s department and opened as the reception building for a new sports centre in 1983. At its height, the ironworks produced 400 tons of cast iron a week.

Built of Pennant Sandstone, with a hipped slate roof. Rectangular on plan with the entrance in the narrower N end. Walls approximately 1m thick, rising 3 storeys as defined by string courses at sill level, and some stone blocks are cramped together and run in with lead. The lower level has six 9-paned windows, the tall second level has two pairs of 9-paned windows with round heads, each pair set back under 3-centred ashlar stone arches. The windows were originally of cast iron, of which a few remain. The top level has 6 round-headed paned windows, which return at the ends. Two well-designed lean-to glazed porches of 1983 are set between original wing walls on the N end.

The whole interior is open to the roof, and has a thick cross wall (restored) on which the huge engine beam was pivoted. Double cast iron pockets with spreader plates set in the walls to carry machinery. Some original pavings relaid in the S part.