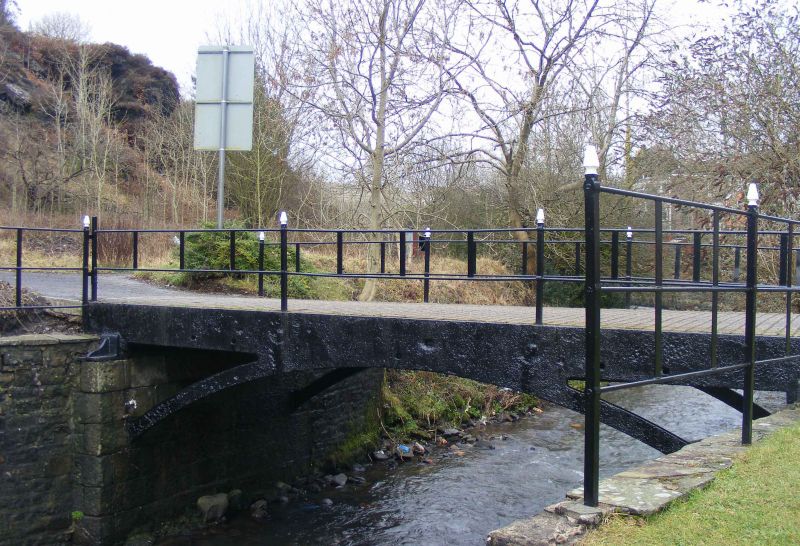 Location: Located at the bottom end of Treharne Row, off Castle Street, and below the Rugby ground.

Cast 1835, probably by the Maesteg Ironworks, and delivered to the Cambrian Ironworks, which was floated in 1839. for erection to carry the parish road which provided access for their workers from housing areas across the Afon Llynfi to 'Yr waith newydd'. The date, MAESTEG 1835 is cast twice on the inside face of each of the outer frames.

The bridge consists of two side castings of slightly cambered plate 430mm x 50mm thick, with arched braces, spanning between a continuous cast iron bearing built into each vertical ashlar stone abutment, designed to take thermal movement. The deck is carried on two intermediate 'T'-beams, 30cm deep and slightly fish bellied, carrying approximately 350mm wide rebated iron planks, the total width being 3.13m. The outer frames and T-beams are spaced by two round section iron tie bars. The 3-bay handrails, now of steel rod on slender square stanchions with knop finials and believed to reproduce the original ladder design. The fish-bellied beams and iron planks are similar to those provided by the company for the Duffryn, Llynvi and Porthcawl Railway, (1825).

Included at Grade II* as an important example of a cast iron road bridge, and one where the span is cast in a single section. Of special interest as an example of Maesteg iron founding, of which very little survives.