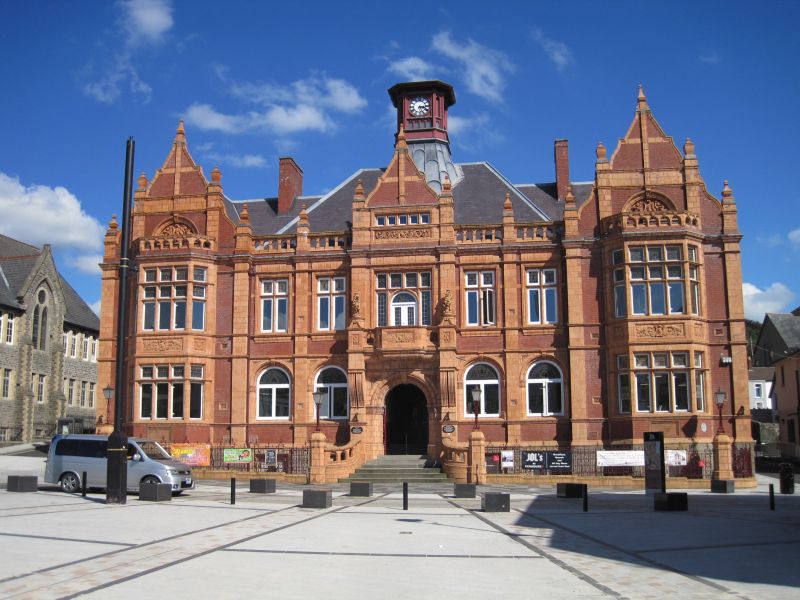 Location: Prominently sited in the town centre, opposite the junction with Castle Street.

The building is dated on a foundation stone, May 1896, was designed by E.A.Johnson of Abergavenny and Merthyr, and built by Harry Gibbon. Although Merthyr was for a time the largest town in Wales (its population was two and a half times that of Cardiff in 1851), it did not attain formal urban status until 1894, when an urban district council was established. The town hall is an immediate expression of that status, and quickly became the focal point for civic and political life in the town. It became customary for the results of parliamentary elections to be announced from its steps, and it was here in 1900 that the victory of J. Keir Hardie as the first Labour Member of Parliament in Britain is said to have been announced. His increased majority in the subsequent elections of 1906 and 1910 was announced from the balcony.

Seven bay façade with advanced outer and central bays surmounted by shaped pedimented gables and linked by arcaded balustrading which continues in the parapets of the full-height canted bay windows of the outer gables. The whole elevation is articulated by full-height pilasters rising through the balustrades, continuous sill bands and string courses, and is enriched with decorated capitals, spandrels, brackets and cartouche panels. Central round-arched entrance up steps with curved balustrades and pedestals carrying ironwork lamp-brackets; ironwork double gates to entrance. The entrance is flanked by elongated brackets carrying pedestals topped with heraldic lions, to either side of a cantilevered balcony over the door, opening from a Shaw-style window at first floor. Outer gables have full-height canted bays with mullioned and transomed windows (three tiers and stained glass to principal chambers on first floor). Between these gables and the entrance bay, round-arched ground-floor windows give an arcaded effect, with narrow 2-light mullioned and transomed windows above.

The building was designed to house the council offices and also the county court. The building was planned around a long internal courtyard, with council offices occupying the front block, and the court and council chamber the rear range. A perimeter corridor linked all areas. The main front block has central entrance hall leading to spacious stair hall at the rear: both are richly decorated with faience and glazed tiles, and exceptionally fine imperial staircase has ironwork balustrading incorporating cartouches, with lamp pedestals to the base. Stained glass stair window onto internal courtyard. Good interior detail including arched and pedimented door heads, panelled dados and low relief friezes. Main chamber at first floor level has curved ceiling divided by ribs sprung from corbels and with central pendants. Mayor's parlour at centre, with leaded lights in doorway to balcony.

Listed for its special architectural interest at grade II* as an exceptionally good example of a late nineteenth century municipal building, its architectural qualities reflecting Merthyr's civic pride. The building retains its external form and appearance substantially intact, with high-quality architectural detail in a range of materials. Internally, despite some alteration, the layout of the principal office block is also substantially intact and includes a fine formal suite of rooms and a remarkable highly enriched staircase and stair hall. Although the rear ranges have been altered, unusual cast-iron roof trusses survive.

The building has important historical associations as the focal point of civic and political life in the town, and is notably linked to Keir Hardie's historic election victory in 1900.