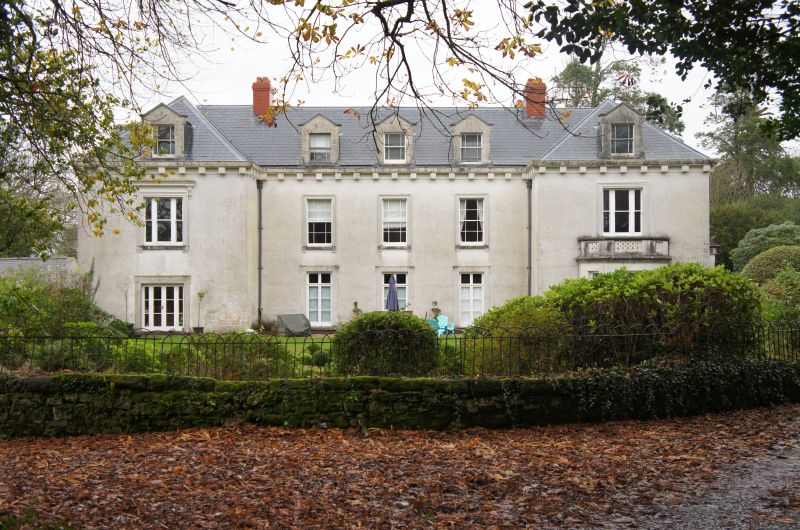 Location: Situated down drive on N side of lane towards Spittal about 800m W of crossroads on Clarbeston Road.

Country house, early C18, said to be 1710, much altered c. 1870. Owned by a branch of the Philipps family of Picton: in the C16 owned by William Philipps second son of Sir Thomas Philipps (died c. 1519), followed by his son James died 1572. John Philipps was High Sheriff 1622, another John Philipps died 1695, his son John, a minor in 1695 was probably the rebuilder, apparently after a fire. Continued in the family to James Philipps, High Sheriff 1787. According to Fenton in 1811 unoccupied since the death of James Philipps in 1794. Owned by his sister Mary, Lady Milford, died 1815, and then by his son-in-law John Lloyd of Ffosybleiddiaid, Cered. whose son Col James Philipps Lloyd lived there until his death in 1837. Altered c. 1870 for Captain F. L. Lloyd-Philipps, High Sheriff 1877. Sold and restored in 1990s, but affected by dry rot 2003-4, and under repair at time of survey.
The principal surviving C18 interiors the staircase on the N side and study to W of it with one bedroom over have detail of c. 1730. It is suggested that the original house may have been the centre part only with the wings added.

Interiors of front range stripped for dry-rot 2004. S front rooms had C19 character. Dining-room with two windows (centre and left of front) had moulded C19 cornice and rose and marble fireplace. Small room to right. Long SE drawing-room with canted bay at S end and corresponding NE library had later C19 character, the SE room with lattice plaster ceiling and plaster wall panels, the NE room with timber ribs to coved ceiling and marble fireplace. The N hall to E of stair had later C19 boarded panelling. The stair had earlier C18 fielded-panelled dado, square newels, ramped rails and turned balusters. The study to W of the stair retained earlier C18 fielded panelling, in situ 2004: to left on S wall fielded-panelled 6-panel door with broad fanlight and keystone, between fluted pilasters (repeated on hall side). Moulded cornice. W wall panelling, bolection-moulded large panel over fireplace. Cupboard to side. Upstairs the main bedroom had a painted overmantel of an ideal landscape.