A Grade I Listed Building in Newport, Pembrokeshire 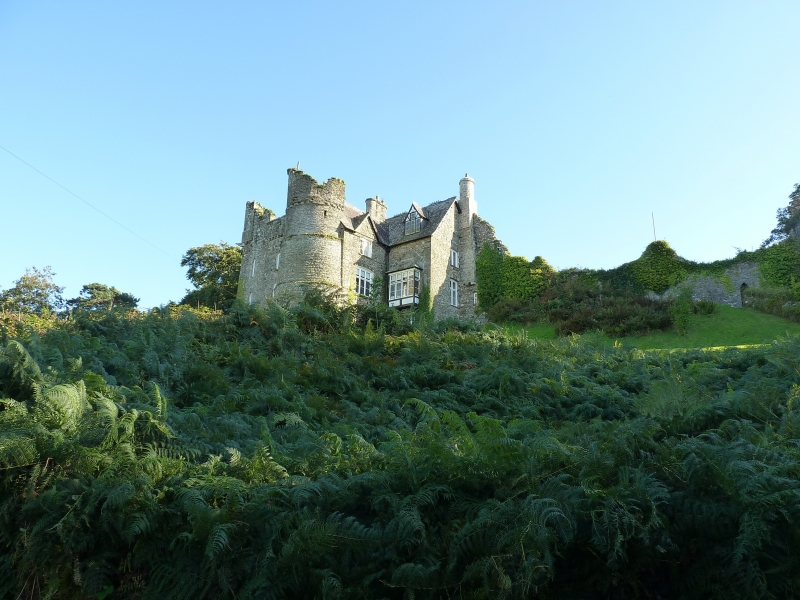 Medieval castle mostly late C13 of which the major surviving part, the gatehouse, was incorporated into a house 1859 for Sir Thomas Lloyd of Bronwydd, Cards, 25th Lord of Cemaes.

Castle founded by William Fitz Martin 3rd Lord of Cemaes in 1191, after loss of Nevern Castle; but most of present structures probably date from the time of the 6th Lord, William Fitz Martin (1257-1324) who inherited in 1282, and to a rebuilding after damage in the uprising of
Owain Glyndwr ca1405. From 1326 to 1543 the Lords Audley of Heleigh, Staffs, held the barony of Cemaes, but were rarely resident and by the C16, when it was sold to the Owen family of Henllys, the castle had been 'in utter ruin for a long time'.

Exterior: House itself is built into back of gatehouse tower with main C19 front to S. 2 storey and basement 3 window front with slate eaves roof, crested ridge, ridge stack of 3 stone circular shafts and very large W end round stack with chimneybreast built up from original curtain wall. Windows are unevenly spread, the upper windows cambered-headed square sashes with marginal glazing bars, stone voussoirs and slate sills, the centre window slightly higher and under an eaves gable. Ground floor has one longer similar sash aligned under first floor right window, gabled stone porch to right and hipped-roofed timber square bay window to left, aligned between centre and left windows above. Porch has pointed arch, slated eaves roof and crested ridge tiles. Bay window has French windows to front. Basement has cambered headed casement. To right of house a lean-to roof abuts a square medieval tower, the rear of the E side of the gatehouse structure; the roof appears to be a post 1859 addition built over the vaulted medieval stairs down to the gatehouse passage. C19 pointed arched porch with flat roof.

House interior is relatively plain for the C19 work, with clear evidence that additions post-1859 have been made on E end. Pointed rough vaults survive on both sides of the original entry passage, wall recesses and other extensive remains of the medieval structure. The centre staircase of the new work runs up from basement level entrance passage of original gatehouse. Plain open-well timber stair not relating clearly to C19 front door, possibly altered post 1859. 6-panel doors and simple fireplaces.

Listed at grade I as an outstanding survival of Anglo-Norman castle building in West Wales and the C19 house built within is an unusual example of C19 romanticism associated with Sir Thomas Lloyd's revival of the customs of the Barony of Cemaes.
Scheduled Ancient Monument Pe 87 (unoccupied parts)