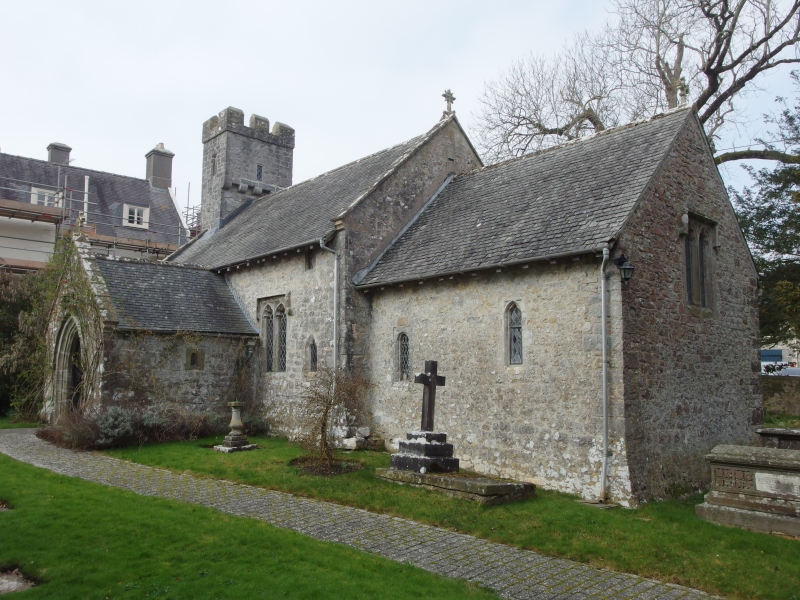 Location: In the centre of Gileston village and immediately to the east of Gileston Manor.

The nave is probably C12 and the chancel C13-C14 but the datable features are all additions and the whole church was given a major refurbishment in the late C15 or early C16 with new roofs and windows; the south door is datable to 1450-80 and this may well be contemporary with the general improvements, also the south porch. There was a Victorian restoration in 1883, and another restrained restoration by G E Halliday, the Llandaff Diocesan Architect, in 1903 with the reconstruction of the chancel arch, and possibly the bellturret, as the only major changes, and since then very little has happened.

Built of local lias limestone walling with a prounounced batter and dressed stone quoins, Welsh slate roofs. Nave with west bell-turret and south porch, chancel.
The porch is central to the nave south wall. It is gabled and projects deeply. It has a pointed arch of two chamfered orders, a small window on either side wall and a coped gable with apex cross. The roof within is Victorian (see Interior). Plain chamfered arch to the inner door with empty statue niche over, very fine panelled medieval door datable to 1450-80. The nave has a 2-light early C16 window on either side of the porch with 4-centred heads, hollow chamfers and spandrels and hoodmould. The left hand one has cusped ogee headed lights, the right hand one cinquefoil heads. At the right hand end of the wall are two small trefoil headed lights for the Rood. Eaves on brackets, coped gables with cross on the east gable. The bell turret stands on the west gable and is corbelled out above the roof, with small belfry opening and a castellated parapet. The turret is noticeably wider than it is thick and would appear to be a later addition to the structure, perhaps even of 1903 (see Interior). It is also corbelled over the west wall where there is another opening. There is an apparently C18 pointed arch doorway with hollow chamfer in the wall below, presumably for the benefit of the Rector/Lord of the Manor and now blocked. The chancel has two trefoil headed lights at differing levels on the south wall, a C16 2-light east window as before. Bracketed eaves but the gable is uncoped and the roofline lower than that of the nave. The chancel north wall is blind as is that of the nave apart from a single trefoil headed light at high level for the Rood.

The interior is plastered and painted apart from the revealed stone features. Transitional style chancel arch of dressed limestone (apparently reconstructed in 1903), and tower arch similar, but this has clearly had its head removed and rebuilt. Doorways to rood stair in north wall. C15 roofs with carved windbraces to both nave and chancel, arch braced collar beams, two tiers of purlins and windbraces, collar purlin with decorated bosses, these last probably added in 1903. The roofs have been largely reconstructed in the 1903 restoration with many replaced timbers and all new boarding. There are four bays to the nave roof, two each to the chancel and porch. Plain Norman tub font with fine decorated C16 conical timber cover. 1903 furnishings except for c1700 twisted baluster altar rails, and pulpit in memory of Francis Edwards died 1882. Partly C15 chancel screen with simple panel tracery. Several good memorials, especially that to Mayor William Giles died 1673 though the memorial may actually date with one of the later recorded deaths, possibly 1724.

Included and highly graded as a fine medieval church with good features and a particularly strong group value with the immediately adjacent Gileston Manor.