A Grade I Listed Building in Colwinston, Vale of Glamorgan 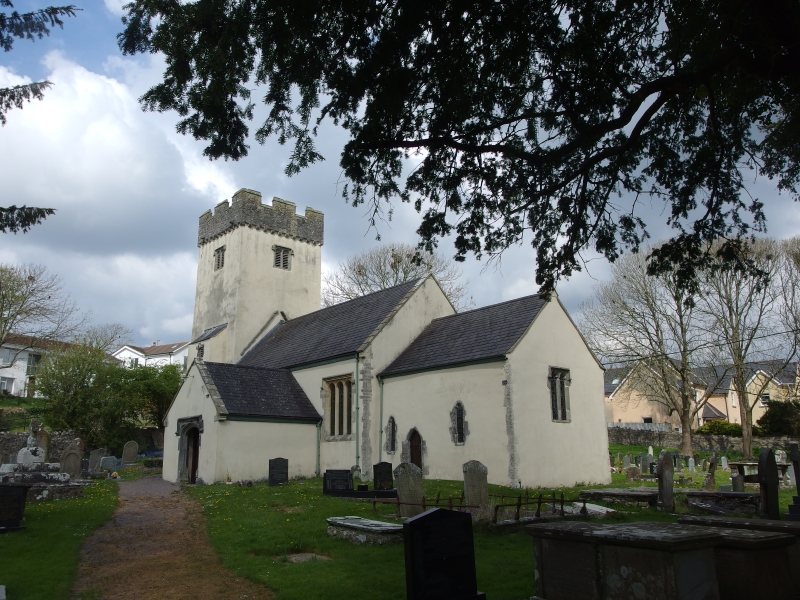 Location: At the west end of Colwinston village.

The nave and the font are Norman and C12, as is the chancel arch. The chancel is probably C13. The tower is probably early C16, although it could be earlier, heightened in the late C17 or early C18. The porch and the windows are probably contemporary with the tower except for the C13 chancel windows and the Victorian south-west nave window. The church had a Victorian restoration by H J Williams of Bristol in 1879 and most of the furnishings date from then. The contractor was Thomas Thomas of Colwinston and the cost £800. The church was reroofed, redecorated and given the north vestry and its entrance doorway for the 2000 Millennium.

The church is entirely rendered and limewashed, presumably over local rubblestone; this is squared white limestone where it can be seen inside the tower, sandstone slate roof. Nave with south porch and north vestry, chancel, west tower.
The south elevation of the nave has a central gabled porch with a C16 moulded Tudor arch doorway with dripmould over, gable cross, the porch is blind. To the left of the porch is a 3-light square headed window with dripmould, and a taller one to the right, both with 4-centred heads to the lights. The north wall of the nave has a similar 2-light window to the left but more than half of the wall is covered by the Millenium vestry which has three small windows and a catslide roof. Gable cross to nave roof.
The chancel has a pointed arch priest's door on the south wall with a lancet on each side, on the right slightly higher. The east gable has a 2-light window with trefoil headed lights and a dripmould over, modern replacement gable cross (see Churchyard Cross). The north wall is blind and has a lean-to shed.
Three-stage west tower with battered square base and embattled top. The ground stage has a west door in plain chamfered frame with an apparently early C17 3-light window above. Projecting stair turret to second stage only on south wall. The second stage has a window in the stair turret and is otherwise featureless. The bell-stage has a 2-light louvred opening with dripmould on each face. Machicolated and embattled parapet.

The church is plastered and painted throughout and has a Victorian open timber roof with double scissor braces. Norman C12 font and chancel arch; the latter is flanked by C13 Decorated trefoil headed niches with the remains of painted decoration, third niche in the wall above. Two chamfered frame doorways to the rood-stair, which is, unusually, in the thickness of the north wall, corbel brackets for the rood-loft remain in the east wall. Medieval wall painting of the Life of St. Nicholas. Victorian benches, tiled floors, pulpit, lectern etc, by H J Williams of Bristol. A good range of C18 and C19 wall memorials and an excellent, probably C15, knight placed in an earlier niche in the chancel north wall. The stonework is unpainted in the upper part of the tower and it is seen to have been heightened in squared white limestone. The upper parts of the bell-chamber and the parapets have been added in this more neatly squared stone, probably to house the single large bronze bell, although this is apparently a pre-Reformation one. The doorway to the new vestry is modern.

Included and highly graded as an important and particularly well preserved medieval church for the Vale of Glamorgan.