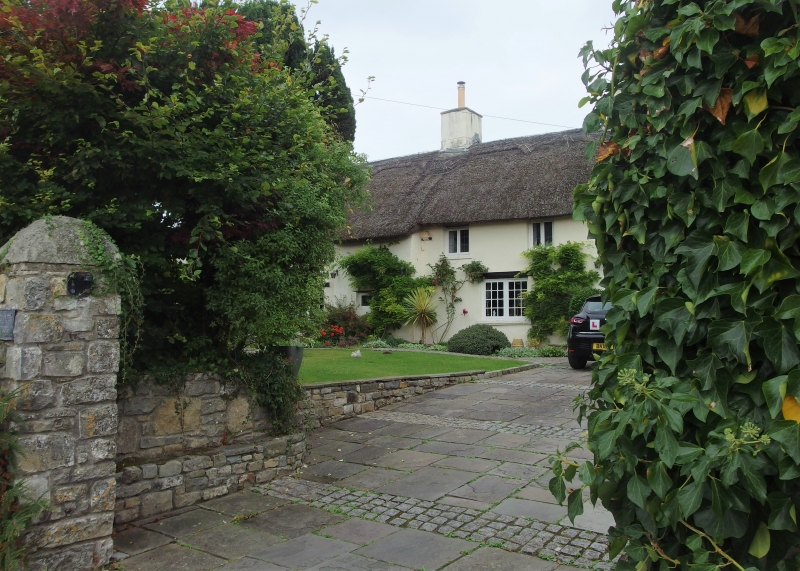 Location: On the north side of Colwinston village street at the east end.

Village House is probably an early C17 cottage which was improved in c1700. T-shaped with 2 unit front wing, the rear kitchen wing probably added later, possibly about 1700. RCAHMW marks the kitchen wing as being the same build as the front wing, with the stair turret a later addition. C19 cottage fenestration replaced in the full refurbishment of 1997-8.

Local rubblestone walls with plastered and painted cladding. Gabled thatched roof with gable-end stacks. T-shaped plan with original two unit direct entry front wing, extra bay added to right in 1997-8 with a third stack, all the stacks are rebuilt. The rear kitchen wing was probably added after the first build, which has thicker walls. C19 cottage fenestration now replaced with late C20 cottage type windows in the major refurbishment of the whole house in 1997-8.
From the south-west (left) end of the front elevation : a window with 3 x 4 small panes to ground floor room and a 2-light casement with small panes and timber head at eaves level above it. Secondly the main front doorway at the entrance to the Dining Room, with wooden boarded door and gabled canopy with ornate bargeboard and plain finial on trellised supports (now overgrown). The Dining Room is lit by a 2-light casement window with 3 x 4 small panes under a timber lintel. On the first floor, to each side of the ground floor window, is a small 2-light window. A small outshut comes next which houses the hearthstair and is lit by a small square window in the front wall. Finally, set slightly back again, is the 1990s extension. This has a double casement with 3 x 4 lights on the ground floor and two small paned 2-light casements above. A double garage is added to the right and completes the range.
The front garden wall, which incorporates a mounting block on the street side, appears largely to have been rebuilt in the 1990s.
The rear elevation has few features, all late C20 windows and a glazed kitchen door. In the yard is a small C19 dairy with slate roof, also completely refurbished.

Entry is directly into the Hall (Dining Room) which has broad chamfered beams with fillet and hollow stops, reed moulded joists, fireplace with chamfered timber bressumer and dressed stone jambs. The outer room has no old features, the inner room is 1997-8. The rear kitchen retains its hearth with bread oven and the washing copper, stone corner stair to the removed first floor (with oven under). Two-light C17 window on the staircase. Principal rafter roofs, heightened on the front slope.

Included as a C17 house, which, despite alteration and extension, has retained character and a number of important features.