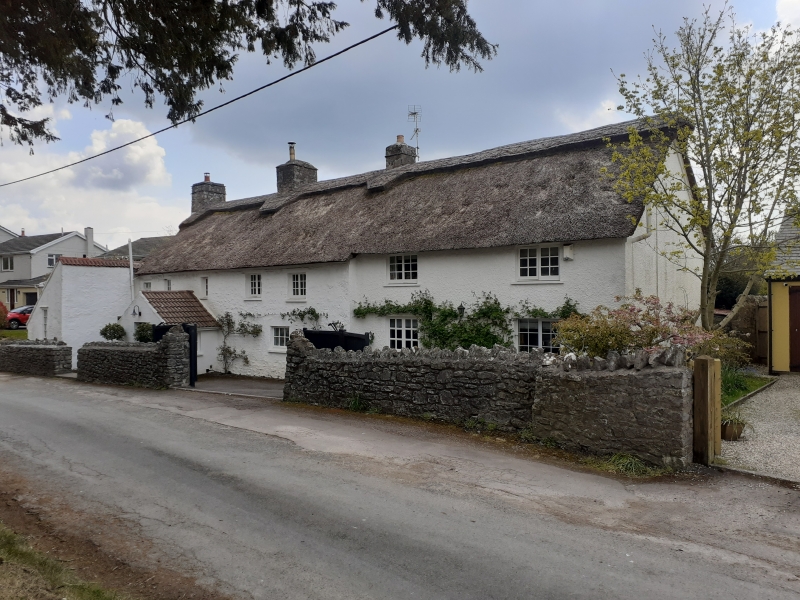 Location: Immediately to the south of the Church of St. Michael and All Angels.

A mid C16 house which was probably refurbished in the C18 and extended at the east end in the C19. It was again improved in the mid C20 and then extended with two additional bays at the west end in the late C20 between 1975 and 1995. Its early C19 extent is shown on the Tithe map. It was originally a two-unit house with a hall and heated outer room of similar size i.e. a very early example of a proper kitchen. The Old Parsonage is unusual in having a mural stair built into the gable wall opposite the fireplace and leading up to the great chamber. Beside the kitchen chimney at the first floor level is a small latrine, a very rare feature in a house of this period and quality.

Rendered and whitewashed, probably over local rubblestone, thatched roof with three square stone stacks, all rebuilt. Two room single depth plan, later extended to three and now to four rooms.
Two storeys, seven windows to the north entrance elevation, some of these are small paned timber casements of the mid C20, others are late C20 plastic. Only four windows on the ground floor of which two are in the extension to the right. Central gabled tiled porch, which is a later addition, square headed door. The left gable has an external stack and a small added single storey wing with a roof lean-to to the gable.
The garden elevation (south) has similar treatment with small paned casements on the upper floor. These are modern double glazed units but in old openings. Four large multi-paned plastic double glazed units on the ground floor, with French doors at either end.

The doorway enters the outer chamber behind the hall stack. The interior has a number of visible features from the early build. There is a stone mural stair, four stone framed doorways with arched heads and plain chamfers with broach or cushion stops, two fireplaces and a wall-niche with chamfered stone jambs, the lintels to the fireplaces have been replaced, both have ovens. The niche is probably a re-used frame from one of the original windows. There is a beamed ceiling with deep chamfers, but this has been extensively repaired. The great chamber has a principal rafter roof but the main timbers have been extensively repaired and the rest of the roof has been replaced. The Victorian additions on the east gable are featureless.

Included as a C16 house, which, despite alteration and extension, has retained character and a number of important features.