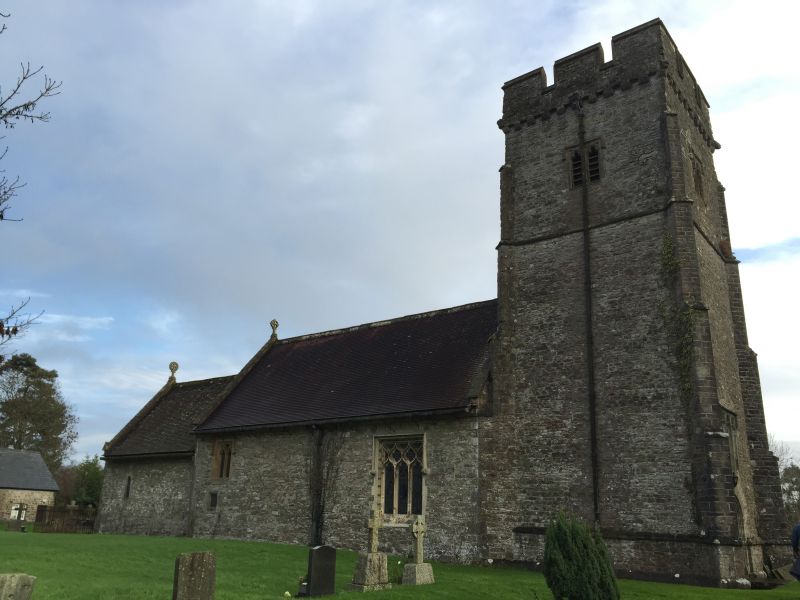 Location: Located at the centre of St Hilary village.

The church has C12 origins and is dedicated to Saint Hilarius, Bishop of Poitiers, who lived in the C4. No other church in Britain is named after him. The S aisle was added in the C14. In 1862 Sir George Gilbert Scott restored the church, commissioned by Mrs Charlotte Louisa Traherne of Coedarhydaglyn in memory of her husband. At this time as part of the restoration the church was refenestrated in the Decorated style, the S porch added and the nave and S aisle re-roofed. The church was further repaired in 1900 under the direction of William Weir on behalf of The Society for the Protection of Ancient Buildings.

The church is constructed of limestone rubble with a red clay tile roof, with the chancel roof stepping down from the nave. The E window was designed Sir George Gilbert Scott in 1862 in a mannered Decorated style and has chamfered hoodmould with foliate stops. The S side of the chancel is lit by a single, leaded lancet and a Perpendicular, square-headed, three-light, cinquefoil window under ogee arches beneath a row of medieval consecration crosses with flat headed priests door between the two windows. The E end of the S aisle has a C19 four-light window with intersecting tracery to the head in Perpendicular style. The S aisle is lit by three C19 windows in the decorated style. The SE window is a three-light, with cusped, reticulated tracery and a row of fourteen medieval consecration crosses above. The SW window is a plain three-light, with trefoil heads and cusped reticulated tracery with hoodmould over. The W window of the S aisle was designed by Sir George Gilbert Scott and is square headed, of three, cinquefoiled-lights under ogee arches with cusped cinquefoils above, with a series of consecration crosses over. The S porch dates from the 1862 restoration, with stone slab roof, coped gable and cross finial. It is buttressed and has a two-centred outer doorway with hoodmould and foliate labels, one with vine leaves, the other with brambles. To each side, above stone benches, are circular windows with plate tracery and encaustic tiles upon the floor. The doorway has nail-head decoration to head and jambs. The inner doorway is round-headed, with plain chamfered jambs and broached stops, with sunk-chamfered hoodmould over. There is an early, decorated corbel above bearing the Bassett arms. The square tower is buttressed and is in the Perpendicular style, with embattled parapet rising from a corbel table. The tower has two string courses and stepped diagonal buttresses. The W doorway is two-centred, with moulded jambs and broach stops. Above is an early three-light, square-headed cusped, leaded window and a hollow chamfered hoodmould beneath a relieving arch. At high level there are two-light belfry windows with square heads and label stops on all faces. The nave is lit on the N side by three square-headed windows, at the E end there are two windows, one above the other, connected to the rood loft, one square and low set, the upper one of two-lights, ogee-headed, under a stilted hoodmould.
To the W is a three-light, cusped window with ogee-reticulated tracery and similarly stilted hoodmould The window has a concave moulded surround, decorated with ballflowers and foliate label stops. The N face of the chancel has a single small lancet window with ogee head presumably of C12 date.

The churchyard has a 1m high rubble wall with two iron kissing gates on the E and W corners. To the E side is a timber lychgate erected in 1900 is in memory of George Montgomery Traherne and designed by Edwin Seward, architect of Cardiff. On the N side is a memorial to the 1914-18 war.

The chancel arch is the earliest remaining internal feature dating from the C12. The chancel has a fine C19 carved alabaster altar piece, depicting the Last Supper and the stained glass in the E window is by Clayton and Bell. In the SE corner is a memorial to Daniel Jones of New Beaupre. The C19 roof of the nave and S aisle is of crown-post form, alien to Glamorgan. At the E end of the S aisle is a recumbent effigy of Thomas Bassett (died 1423). On the S side of the nave is another recumbent effigy thought to represent the son of one of the lords of St Hilary, of the De Cardiff family, dating from the C14. The N side of the nave has numerous memorials including members of the Traherne and Bassett family. The pulpit, lectern, altar rails and pews are all contemporary with Scotts restoration of 1862. The font is of Norman date. The tower opens to the nave by a pointed arch. the tower screen is in Tudor Revival style and is designed by Clarke of Llandaff in 1913.