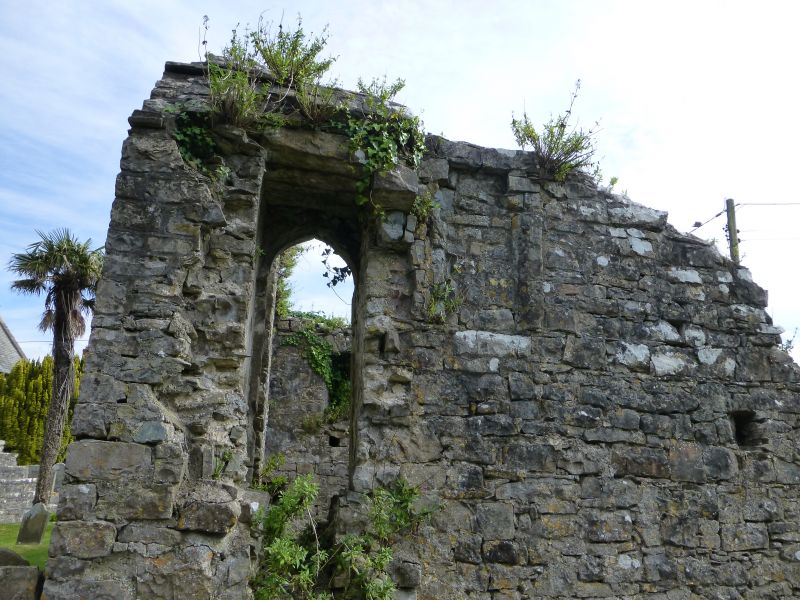 Location: About 30m south of the south porch of the Church of St Illtud.

c1500. A former chantry priest's house, it was bombed in 1940 and is now a roofless ruin. It was built opposite to the Raglan Chantry where the priest officiated every day until the Reformation. It must have remained a house for many years, but at some time was put to industrial use; in 1856 it had recently been a mill, it was later a house again and then a builder's workshop and latterly was in use as a smithy (recorded in this use in 1906). This building was destroyed by one of the only two bombs to fall on Llantwit Major during WWII. The building was first included in the list description for the Church of St. Illtud.

This building was originally a two-storey structure with gabled roof with stack to south-east and with the stair door in the south-west corner. The walls are of coursed limestone rubble with dressed quoins. The north-west gable wall which faces the church has a window of two cusped headed lights and a small single light window over. It has been suggested that these windows are too elaborate for the house and have been taken from the church during one of the restorations. The north-east long elevation has two chamfered oblong ground floor openings and one right hand similar opening to the upper floor. The south-west long elevation has a tall single opening to left hand with a rectangular window opening above it. Formerly a lean-to to the south-east gable end.

Interior not accessible at resurvey.

Included, despite its ruined state, for its historic importance as a chantry priest's house dating from about 1500.