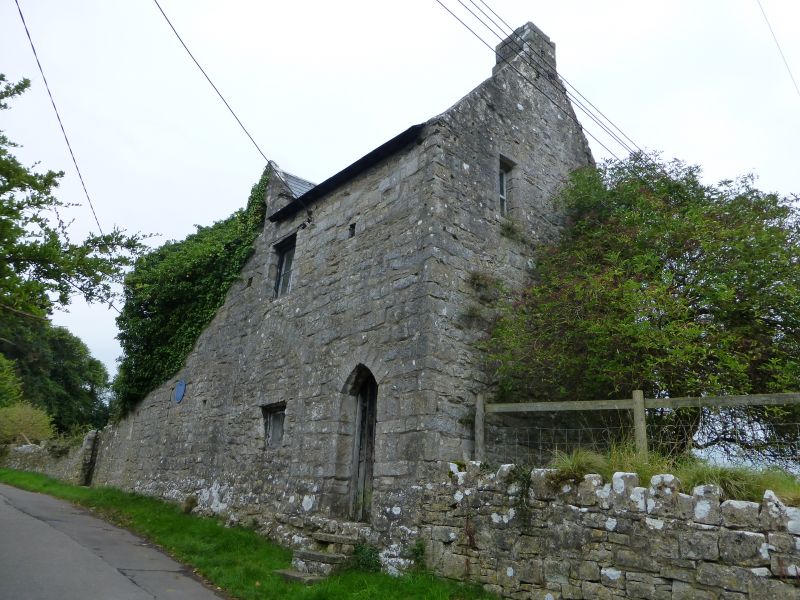 Location: About 80m south-west of the Church of St. Illtud. The building is on the roadside and is sited near the south-east corner of the 'Monastery' field.

C13 gatehouse to the former monastic grange of Tewkesbury Abbey at Llantwit Major. It appears to have been adapted as a house and for agricultural use at different times. It was apparently a house until c1880 and was a Parish Room in 1906 (Rodger).

Two storey rectangular structure with squared limestone walls, and a steeply pitched Welsh slate roof with coped verges, which has a chimney to the north-east. Blocked opposing 2-centred archways each about 2m wide in the south-east and north-west elevations, with flanking narrower doorways each about 1m wide, that in the south-east elevation is still in use.
South-east elevation ground floor with ventilator slit to left hand, wide doorway to right hand of centre and single door to right hand again. Upper floor of south-east elevation with a single-light oblong window with chamfered jambs and a central gabled dormer with trefoiled light; this is in the same plane as the wall. A modern window has been inserted over the crown of the blocked archway.
Similar oblong window to upper floor in north-east gable. Against the south-west gable, an external flight of stone steps leads to a doorway with triangular stone head, sheltered by a gabled porch of stone with slate roof; projecting masonry bonds at south-west end.
The north-west elevation has two small square lights and a larger taking-in door inserted between them on the upper floor.

Interior not available at resurvey, but it is said to have a modern wooden board and joist ceiling to the ground floor.

Included and highly graded as an important and very complete survival of a key part of an early medieval monastic grange.
Scheduled Ancient Monument No. 141 (GLA).