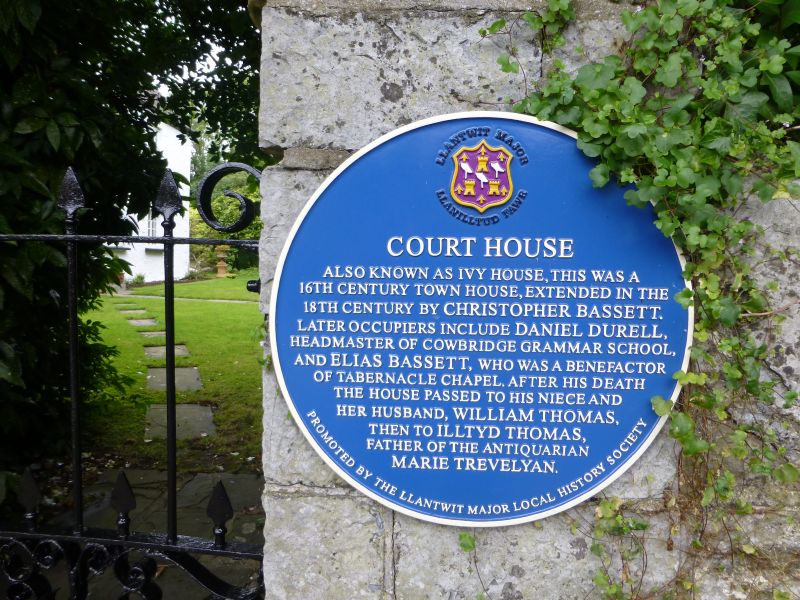 Location: About 200m north of the Town Hall.

Probably early C16 in origin as a two room unit with a lateral stack. This house was given a rear wing. The house was then reconstructed in the early C18 when it was given a balanced frontage with a central pediment/gable. 'The central chimney was totally removed in the 18th century and the area used as a passage; two new roof trusses had been constructed, one on each side of the chimney before it had been removed.' (RCAHMW) The whole building as now is shown on the 1840 Tithe map. Apart from the usual modernisation in the C19 and C20 the house has not been greatly changed since.

North-east ground floor room with lateral stone fireplace of c1500 with massive stone slab surround and chamfered jambs; stairs to north-east of fireplace from ground floor to attic with small staircase lights. This room also has ovolo moulded beams on north-east/south-west axis. South-west ground floor room with three stopped and chamfered beams on north-west/south-east axis. This room also has shutters and dado panelling, and a C19 firesurround. Rear ground floor room to north of entrance hall with square joists only. Stopped and chamfered beams to first floor. The first floor was divided into four bedrooms in the C18 whereas previously it had two good sized chambers. Principal rafter roof trusses with two tiers of continuous purlins. These are cut for the central gable as an early C18 alteration (see History). These developments are shown in plan in RCAHMW.

Included as an early C16 house which was extensively altered in the early C18 and retains both character and features of special interest.