The Old School, including attached walling 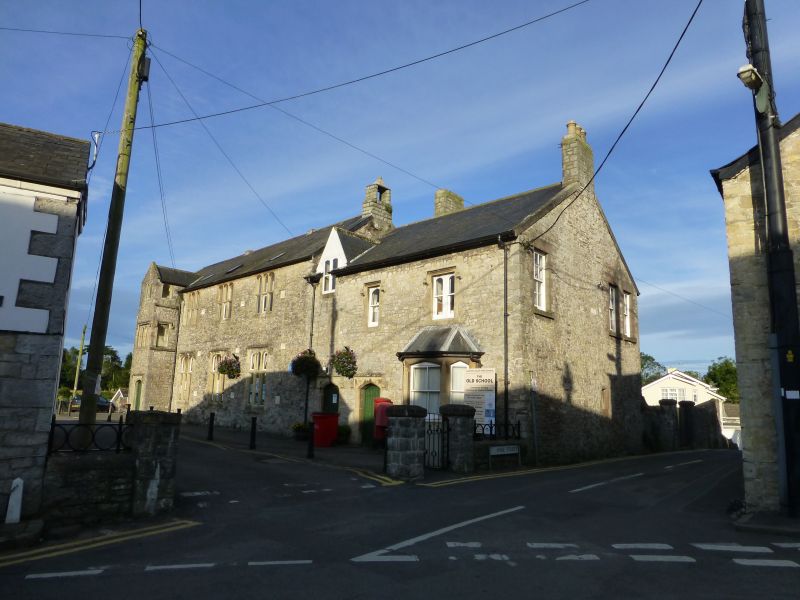 Location: About 100m north of the Church of St. Illtud.

Possibly late C15; mentioned as newly built in a conveyance of 1465, but the surviving ancient features appear to be C16. Shown to its original dimensions on the 1840 Tithe map. Converted and possibly extended in early 1870s into an elementary school (plaque dated 1873) which was opened in January 1874; this followed the Education Act of 1870 and the election of the School Board in 1872. The site was donated by the Ecclesiastical Commissioners. Further extensions were added to the school in 1899, 1924 and 1953. The school became very overcrowded following the opening of R.A.F. St. Athan in 1938 and a secondary school was finally built in Llantwit Major in 1950. Since the closure of the school in 1975 it has been used by the Llantwit Major Town Council as a Community and Recreational Centre and the Council Chamber.

Built of limestone rubble, fairly random to the original house, while the later additions are squared and coursed rubble; Bath stone dressings to the late C19 features, Welsh slate roofs. Two storeys, with an attic to the original house only.
The original house is set in the centre of the south-east elevation. Original entry probably in the south-west gable which now has a late C19 transomed 4-light window with dripstone with square stops below and similar window above; blocked slit window to attic. From south end, front elevation with blocked rectangular opening to ground floor. Secondly, probably original projecting bay similar to those of Old Swan Inn (qv) and Cherry Tree and Tudor Cottages (qv); late C19 4-centred doorway on the ground floor, an early 3-light mullioned first floor window with dripstone and with a single light window to each return; early 2-light window to attic gable with a single light window to each return. Thirdly, fourthly and fifthly in front elevation, three late C19 3-light transomed and mullioned windows to both ground and first floors as above but without the dripmoulds on the upper floor. Steeply pitched roof with three roof-lights and a ridge ventilator. Hipped bellcote with ball finial to north-east gable end.
Rear elevation of the original house with stair and garderobe lights. Two gabled dormers, rear lateral stack. Projecting classroom wing with tall chimney and 3-light window in the gable end.
A lower and probably early addition to the north-east end, incorporating old walling and converted to a headmaster's residence in 1873. From the south-west, gabled 2-light dormer, doorway with plaque above it inscribed 'LLANILLTYD/FAWR/1873'. This is the entry to the school and the staircase. Secondly, further similar C19 doorway with a single light C19 first floor window above; both doorways with plank doors and dripmoulds as before. Thirdly, canted bay window with slate hipped roof and sash lights 1 over 1 2 over 2 1 over 1 panes; 2-light sash window to first floor; both windows with 1 over 1 panes and dripmoulds as before. Gable stack with a second stack on the rear slope.
Rear elevation has a gabled wing projecting behind the first door, this will be for the staircase, lit by 2-light windows. Two 2 over 2 pane sashes to the house with further windows in the gable end.
A set-back later C19 or later stone wing with three mullioned windows with dripstones at the south-west end of the original house. Return with a 2 light window on each floor and then a single storey gabled classroom with a 5-light mullion-and-transom window.
Low C19 dwarf wall at entrance with late C19 to early C20 low iron railings; stone gate piers.

Included as a late C15 to late C16 house which, despite major changes and additions in the C19 and C20, retains both character and features of special interest. It also has historic interest both as the sometime Rectory and then School of Llantwit Major.