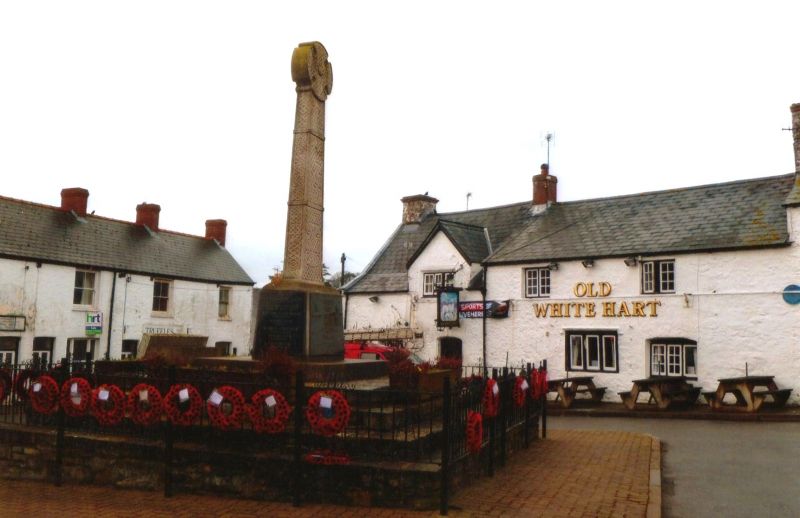 Location: On the west side of The Square in the centre of Llantwit Major.

Late C16 to earlier C17. South-west wing comprises probably an early addition to two unit RCAHMW type B house. This latter comprises the present middle wing, where the roof has been raised. Former outbuilding wing at north-east end, also with raised eaves and now part of the public house.

Whitewashed stone rubble walls and Welsh slate roofs. South-west wing with stone stack with weathered top to left hand, middle wing with rebuilt brick stack (rebuilt since 1921) to left hand and stone stack to right hand; modern stack to right hand of north-east wing. South-west wing of one storey and attic; other two wings of two storeys.
South-west wing: On ground floor, 3-light cambered headed window with 6 6 6 small panes to left hand; right hand stone cross-passage doorway with arched head and chamfered jambs; wooden boarded door. Above it, wide gabled dormer with 3-light wood casement with 4 4 4 small panes and remains of old dripstone.
Middle wing with higher eaves. Windows not in alignment. On ground floor, original 3-light stone hollow-chamfer mullioned window with dripstone in middle and, to right hand, 3-light segmentally headed casement with small panes as before. On first floor, two, 2-light casements with small panes as before.
North-east wing comprises a formerly thatched outbuilding. Cambered headed doorway with overlight to left hand, with a large 3-light transomed cambered headed window beside it; a small modern 2-light window and a small single light window set to right hand (this was previously a doorway). Three, 3-light casements with small panes on first floor as before.
All the windows on the main elevation are mid C20 and are recessed deeply into the wall; only the stone mullioned window is not like this.
Rear elevation not seen at resurvey (March 2003).
Front path to south-west wing bounded by low stone walls terminating in gate piers with rendered coping; garden wall returns to south-east angle of building.

The interior has been altered for public house use but the plan and details are still evident. Doorway from cross-passage to middle wing with arched stone head and probably replaced unchamfered jambs. South-west fireplace to middle wing with dressed stone jambs and wooden bressumer; stone fireplace stairs to north-west; seats to front windows; c1800 fireplace with stone arched head at north-east end. Upper floor not seen at resurvey.