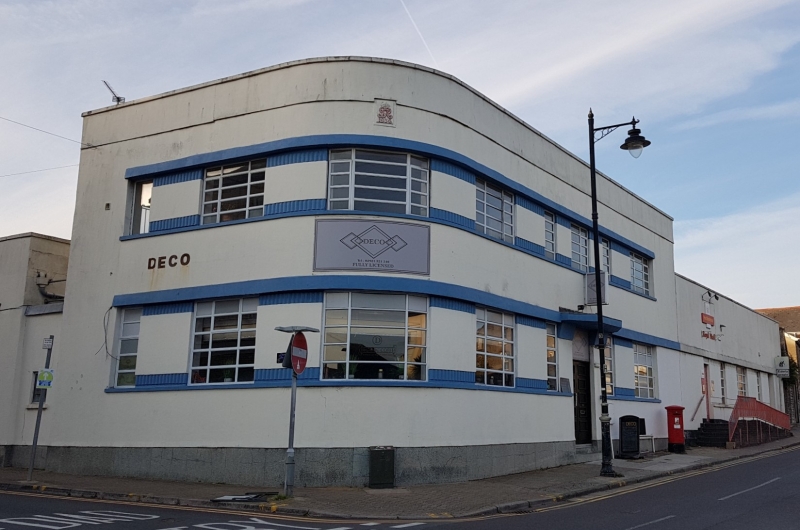 Location: On the northern corner with Ludlow Lane.

Dated 1936; designed by A R Myers, an HM Office of Works architect; the contractors were Messrs Davies and Davies. Opened on 4th November 1936. Art Deco style with characteristic horizontal strip glazing, fluted ornament and wrap-round effect of the rounded corner; the building shows probable influence of transport related buildings in the London area. At the time of completion it is likely to have been at the forefront of Post Office design. Single-storey extension (stylistically in-keeping) 1990.

Exterior: Two storeys; red brick construction with artificial blue Pennant stone facade given painted roughcast render above plinth; high parapet with coping concealing roof. 5-window facade to Albert Road, 1-window to rounded corner and 2-windows to Ludlow Lane. The windows on both floors are contained within continuous recessed bands, deeper to ground floor; both bands have sills and shallow drip moulds and the spaces between the windows are ornamented to top and bottom by fluted detail. The casement windows were originally steel-framed - now mostly replaced but to a similar design, those on the ground floor being top-opening. The horizontal emphasis of the design is continued in the dominant horizontal glazing bars, vertical bars being reserved for the 3-light windows. The corner windows are not rounded but are slightly splayed; above is the rectangular 'GVR 1936' plaque. The main entrance is midway along the Albert Road front; bracketed polygonal canopy over door which has deep and angular metal traceried overlight. Modern PO sign and ramp for disabled. At the N end is the 5-bay modern extension with similar glazing set in horizontal band. Stepped down to W in Ludlow Lane is a low and narrow section linking with the 5-window single storey rear range. Pivot windows set in a horizontal band and with similar glazing; advanced square panels between each window. At the rear this range terminates in a broad facade with low pediment to centre; the coping is continued across this; slightly altered to right by fire escape.

The ground floor interior has been modernised.

Listed as rare local example of public building in this style of architecture and for its contribution to townscape in centre of Penarth.