A Grade II Listed Building in Penllyn, Vale of Glamorgan 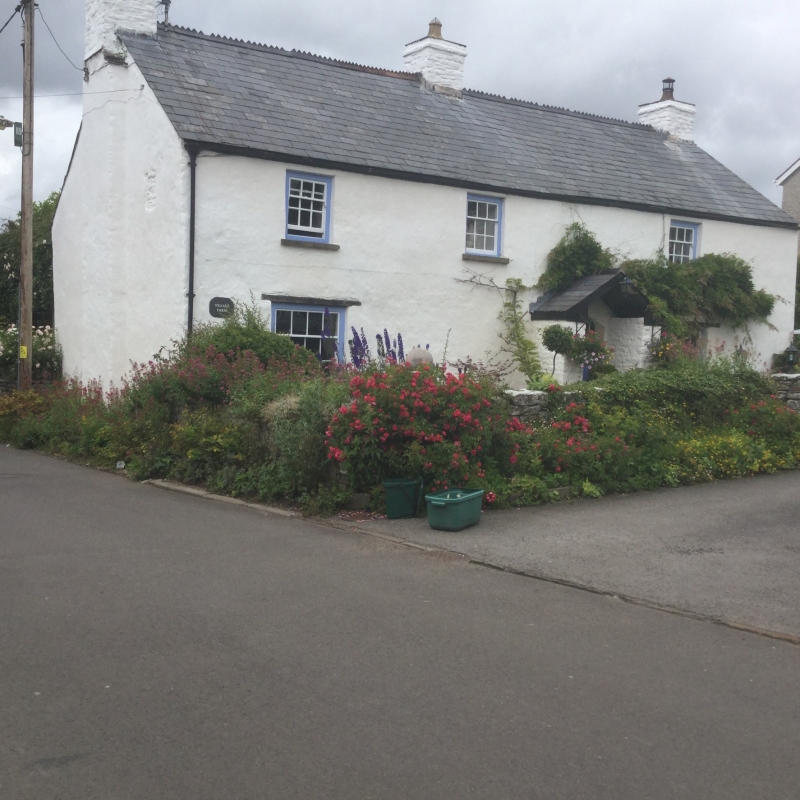 Location: Towards the north end of the village of Penllyn; facing south at right angles to the road.

This probably early C17 farmhouse is of at least two, possibly three, phases. The previous list description records that, 'No masonry breaks found at front and rear is rendered, so the visible external structure does not provide clear evidence for the phasing of the building.' The house possibly began as a 2-bay hall (the western end) and was then enlarged both by the addition of the outer room (kitchen) to east, the cross range to rear and the staircase at the angle between; the latter two phases are possibly contemporary. There were alterations in C19 and a modern renovation in July 1993 at the time of the listing inspection. The associated farm buildings are demolished.

House built of local rubblestone, wholly rendered and painted, with Welsh slate roofs and stone chimneys. Two-storey 3-unit single depth main range with a gabled stair block to rear at the side of the offset cross range.
The main three window front has stone cills to various small-pane sash windows, horned except for that to first floor centre; larger ground-floor left windows 4 over 8 panes. The three first floor windows are 3 over 6 panes. Later gabled porch to main entrance which is offset to right and opens onto a skewed form of cross-passage. Good dressed stone doorway with 4-centred chamfered arch, diagonal stops and boarded stable type door. Whitewashed east gable end. Projecting chimney stack to west end and stepped back behind is the one-window limewashed cross range with a 2-light casement over a 3-light one and a battered buttress to the corner, with stone stack on the gable above. There was formerly an attached bakehouse beyond, but the boarded loft door and blocked doorway on the gable end which were visible at the time of listing in 1993 are now gone (but see Interior). An ovolo-mullioned window was once recorded on the east side of cross range, but the present 2-light window has a hollow-chamfer mullion and the Tudor dripmould has been broken off. The gabled stair tower which projects at the angle has a lower ridge and a blocked window to north side; it also a timber-framed window with iron cames. Attached lean-to hood over rear porch with similar Tudor doorway to that on the front except here ornamented with broach stops. Low modern cross range to left.
The main elevation is fronted by a rubble-walled forecourt with stile.

The separate phases of the building have created a somewhat complex plan especially with regard to the stairs. The main fireplace has a bressumer with straight-cut stops and the cross-passage backs onto the chimney. The front and rear doors are not directly opposite each other, creating a skewed form of cross-passage, and they have differing, although contemporary, stops. The previous list description says, 'High up on the north wall of the hall are voussoirs said to be to a blocked carriage arch - see also possible springers for an arch, opposite on the front wall; however, as this is the main room of the house it seems more likely that they were relieving arches.' (not visible at resurvey October 2003) The staircase has been replaced in timber; the cross range also has remains of a stone spiral staircase, and the visible evidence for the doorway into the demolished bakehouse. Some modern beamed ceilings and an altered roof structure of principal rafter type.

Included for its special interest as a C17 house which retains good character as well as a number of features from different periods.